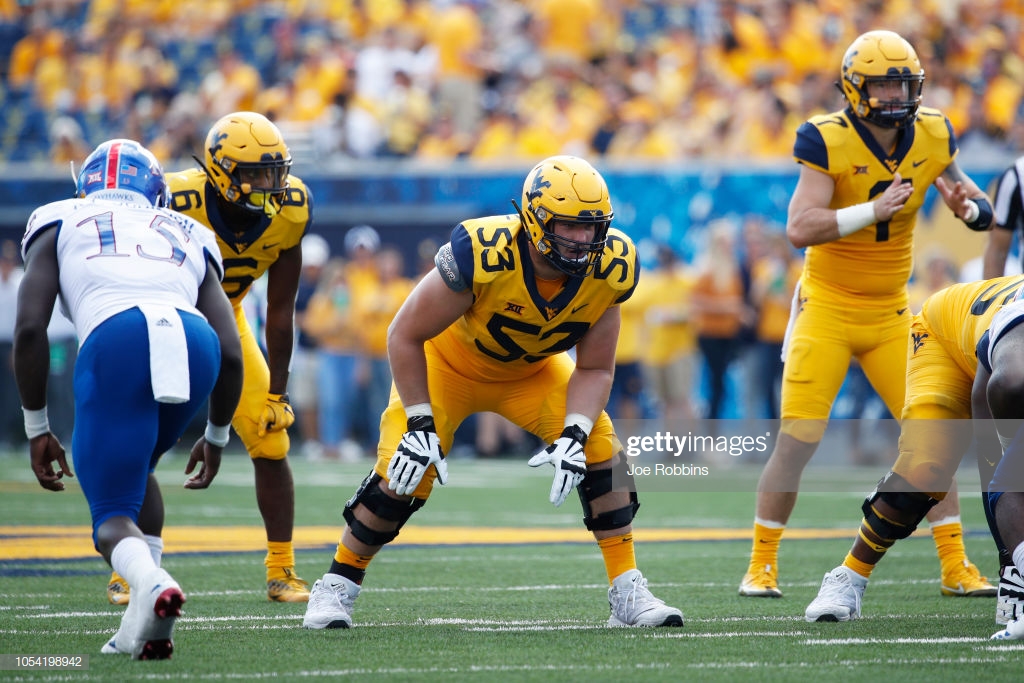 Good luck finding a team, or fan, who won’t like having Colton McKivitz on their team. Big. Tough. Growing into a leader. And an avid duck hunter.

Feels like the Pittsburgh Steelers should have their draft card ready to go.

2019 was a difficult year for McKivitz and the Mountaineers, limping to a 5-8 finish under first year head coach Neal Brown. But McKivitz viewed it as a season for personal growth and one that’ll lead to a bright future for the West Virginia program.

“First weeks were rough,” McKivitz told me in an interview during Senior Bowl week. “Trying to figure out how everything worked. How the coaches coached. It was a complete buy-in from everyone. I thought about coming out but I decided it didn’t matter who the coach was going to be, I was going to be there. Just a complete transition with Coach Brown. It was a positive. I look for a quick turnaround in Morgantown.”

Despite the uneasy record, McKivitz believes Coach Brown laid the foundation for the team to make a big jump in 2020.

“He demanded a lot of leadership out of myself. That was the one thing he challenged me with over the year. Pretty much the only senior guy in there with a lot of playing time. His goal was to get me to be a more vocal leader. He accomplished that. The way he was personal with everyone. It’s tight-knit, it’s family, we spend time together outside of football and inside. Just a complete culture change which was good to see.”

McKivitz didn’t just become a bigger leader in 2019. He became stronger too, readying him for the NFL.

“Probably added about 100 pounds on bench. That was one of the key things. I needed to get stronger upper body wise. It was definitely something I worked heavily on and definitely improved.”

Beyond strength and starting experience, versatility is another of McKivit’z calling cards. He’s spent time at both tackle spots and even spot started a game at guard his junior season. He expects to work both sides during the week of Senior Bowl practices and discussed the difficulty of flipping both sides.

“I notice with my right hand I punch with my inside and on the left I punch with the same hand instead of the inside one. Sometimes I’d drive out of a left stance and end up in a right stagger. Through spring ball, trying to work out those kinks, but once you get it down, it’s fairly simple.”

McKivitz says he got to meet and talk with the Steelers’ Monday night. While he, like any player in Mobile, would just love the chance to end up in the NFL, going to Pittsburgh would be extra special.

“Personally I was a Steelers’ fan. Being close to Pittsburgh, through my grandfather, so I got to meet Rooney and a couple other guys. It was pretty awesome. One of my uncles was actually a sports commentator for Super Bowl 40.”

He would also continue the trend of Duck Themed nicknames, earning the moniker “Mother Duckling” for leadership shown while at WVU.

“That was from my left guard. He decided that it would be a good idea because I was the leader who brought everyone together. And I duck hunt a lot. So I was Mother Duck.”

If he gets drafted, expect him to go on a couple hunting trips with Devlin Hodges and James Washington. No word on who has the best duck calls.

The Steelers will likely be on the search for versatile, tough offensive linemen given the way they’ve been gutted during the regular season, losing Fred Johnson and Patrick Morris to waivers, with BJ Finney slated to test free agency and Ramon Foster a potential cap casualty.

McKivitz is currently ranked as the #3 offensive tackle by NFL Draft Scout and with a good week in Mobile, could boost his stock even higher.