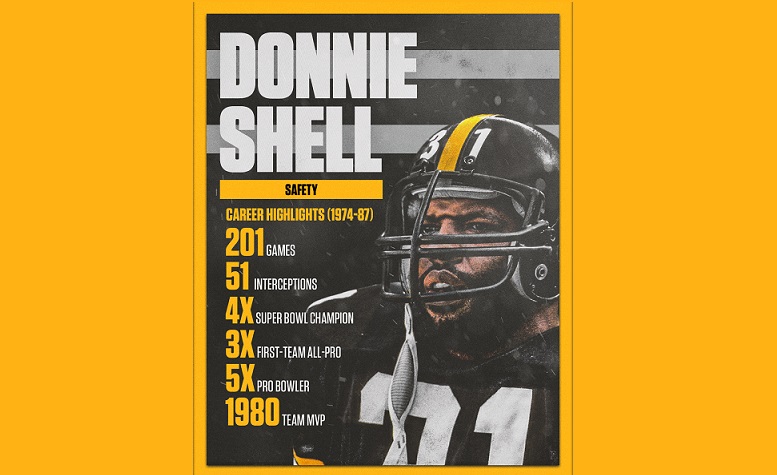 It was with a mixture of joy and relief that the news was received of Pittsburgh Steelers safety Donnie Shell’s pending enshrinement into the Pro Football Hall of Fame by the team’s legion of fans. Shell, a 1974 undrafted free agent, was a staple of the back end of that legendary defense, particularly in the latter stages of the 1970s and into the following decade.

Among his many accomplishments, he remains the last player since 1972 to have intercepted at least five passes in six consecutive seasons. Only one player has ever done that in more than six straight years. His 51 career interceptions are the most by a strong safety in NFL history.

Yet he was more than just a strong safety. “I think I was ahead of my time”, he confessed to Will Graves of the Associated Press, saying, “don’t know many strong safeties that came in and play slot corner”, which was something obviously far more rare then than it is today.

“When you can cover Cliff Branch and Isaac Curtis in the slot, I think you play pretty well”. Prior to entering the starting lineup in 1977, Shell was used in the Steelers defense as an extra defensive back alongside starting safeties Mike Wagner and Glen Edwards. I am pleased to say that both remain with us to see their teammate finally get his due. Edwards moved to the Chargers in 1978. Wagner retired after the 1980 season.

Yet it wasn’t easy for Shell to find the opportunities to make impressions, precisely because of guys like Wagner and Edwards, who both came in in 1971 and were established as successful starters by the time he was signed out of SC State following the 17-round 1874 NFL Draft. How did he get noticed? Hit everything you see.

“Once we started hitting, I think I got their attention”, he said. Graves writes that George Perles, who sadly just recently passed away, was among the first to notice him and wanted to keep seeing him sent up the middle against the run.

“I was knocking them out. That’s how I knew I belonged there”, Shell said. “I knew I’d make an impression”.

It’s fair to say that he was successful, as his impression will now be long-lasting, in fact immortalized in a bronze bust as the 23rd major contributor of the Steelers organization to enter the Pro Football Hall of Fame.