Throughout all my years on this earth, I have discovered three basic guarantees that come with life. Death, taxes and the Pittsburgh Steelers developing wide receivers at ease. Whether it be JuJu Smith-Schuster, Emmanuel Sanders, Mike Wallace, Santonio Holmes or Antonio Brown, the Steelers have graduated many receivers from the raw prospect class into legitimate NFL talent.

This season, another wide receiver has graduated from raw rookie into talented sophomore as James Washington has been playing lights out football over the last month. Since week nine, the second-year wide receiver has put up 417 receiving yards and three touchdowns as he has emerged as a trusted playmaker after the injury to Smith-Schuster.

Year two has been an important year for Steelers’ receivers throughout Mike Tomlin’s tenure. While the team may opt to only let the receiver swim in shallow waters during their rookie year, year two is their first test in the deep end. Washington, like many others that preceded him have been able swim in these deep waters.

Below is a list of some notable rookie to sophomore jumps during Tomlin’s tenure. 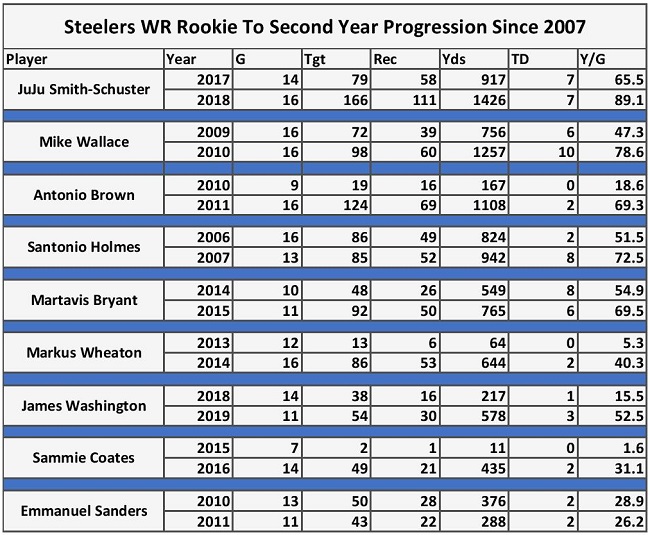 The list is truly incredible as it is almost like clockwork that the Steelers have been able to get their receivers to produce in year two. There are those that blossomed into full blown stars and there are even those who did not have a fruitful career in Pittsburgh such as Markus Wheaton and Sammie Coates, though they were even able to be credible to at least average during some portion of their tenure.

Washington’s development, while still impressive, is a tad different though. His development is a lot more meaningful and significant than most of those on the list, perhaps with the exception of Brown who emerged out of left field during the 2011 season.

Washington’s development was not always guaranteed or expected like many of the others listed above. Smith-Schuster, Holmes, Wallace and Bryant all had exceptionally productive rookie seasons and were expected to take another step up the ladder, which they did. Wheaton and Coates did not play much during their rookie year but they were like a new car just waiting to be rolled out of the lot as many expected big contributions from them.

On the other hand, Washington had a disappointing rookie season. He did not take Pittsburgh by storm like Wallace or Smith-Schuster. In fact, he was the storm, often bringing chaos and frustration during his rookie year. There were drops and there was the putrid 42.1 catch percentage that had some doubting Washington’s true potential. Was he still a promising young receiver who needed more time to develop or was he going to be the first Steelers’ receiving prospect to not graduate from their development in quite some time?

The Steelers did not necessarily plan to throw Washington to the fire this season to find that answer but after the disappointing performance by Donte Moncrief and injuries to Smith-Schuster and Diontae Johnson, Washington received a consistent amount of playing time. Thrown to fire, Washington not only came out unscathed but he emerged red-hot.

By the time this season is all set and done, there is a good chance that Washington will have surpassed Wheaton and Bryant for most receiving yards during year two. There is even an outside chance he can surpass Holmes if he can keep playing at the rate he has been going at over the last month.

No matter how the final four games transpire, there is little doubt in Washington anymore. He has single handedly carried the receiving load at times and his play has propelled the Steelers’ offense to victory time and time again over the last month.

While some may have believed that Washington would not get to this point, here he is. Now part of a long list of talented receivers, Washington looks to be the latest to graduate from raw rookie to sophomore stud. And with four more games to go, he can also add some more accolades to his diploma.