With four weeks remaining in the 2019 NFL regular season, the Pittsburgh Steelers, according to my analysis, are one of 12 teams with a chance to win the Super Bowl in February. That analysis is courtesy of a long-running study I’ve done on the ANY/A (adjusted net yards per passing attempt) stat.

If you are late to the party when it comes to the ANY/A stat, below is a quick recap of it courtesy of Pro Football Reference, Football Perspective and Inside The Pylon. It’s a stat dedicated to the passing game for both offenses and defenses.

Now for some history related to the ANY/A stat and why I believe the Steelers are currently one of 12 teams with a chance to win this year’s Super Bowl.

While that 2007 Giants team is a statistical outlier, their ANY/A differential was close to even through Week 13 at -0.6. Additionally, if not for the miraculous helmet catch by Giants wide receiver David Tyree late in Super Bowl XLII, New York’s G-men wouldn’t be an outlier at all. That 2007 Giants team did, however, have a regular season defensive ANY/A of 5.4, which more than qualified them to win it all that season. 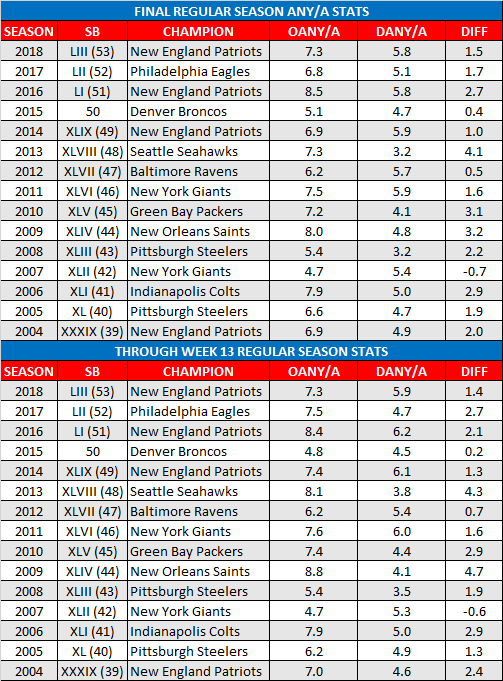 Below is a table of ANY/A data from this season through Week 13 and listed in it are the 12 teams that will enter Week 14 with not only a positive differential, but a defensive ANY/A of 6.25 or lower as well. In short, one of these 12 teams listed in the table is very, very likely to win the Super Bowl this year. It will be a huge upset to this stat should one of these 12 listed below not ultimately win at all this year. 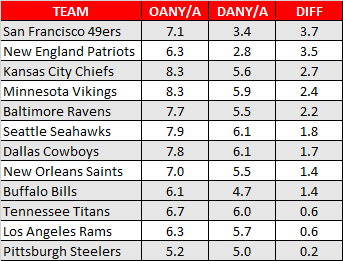 The Steelers are the wild cards of wild cards when it comes to the 12 identified teams listed in the table above and that’s mainly because of what all has transpired at the quarterback position for them the last few weeks. With rookie quarterback Devlin Hodges now the team’s starter for possibly the remainder of the season, the Steelers current offensive ANY/A stat of 5.2 might not be a great gauge for that unit. For example, in Hodges’ limited playing time this season he’s compiled an ANY/A stat of 7.44, which is quite an impressive number. Should he continue to post a game-by-game ANY/A stat of 6.5 or greater in the final four regular season games, it’s hard to imagine the Steelers losing more than one of them as long as their defense continues to play like they have since Week 3.

Looking at the Steelers final four regular season games it’s easy to see that two of the teams they’ll face aren’t great on either side of the football when it comes to the passing game. The Steelers other two final four regular season games are against the Buffalo Bills and Baltimore Ravens, two of the 12 teams listed above that have a very good chance of winning it all this season.

The Steelers Week 14 game is on the road against the Arizona Cardinals. Not only should the Steelers be expected to win that game, their ANY/A differential should increase slightly in the process. A loss to the Cardinals on Sunday, however, would likely result in the Steelers needing to close out their 2019 regular season with three consecutive wins.

The Steelers will end Wednesday listed on bovada.lv as 80-to-1 odds to win the Super Bowl this year. Assuming they beat the Cardinals on Sunday in Arizona, those odds might lower just a tad. So, in closing, if you have an extra hundred dollars burning a hole in your pocket, you might want want to consider betting it on the Steelers to win it all in February. They have a good enough defense to do just that and if their offense can make a few small strides in the final four weeks of the regular season, they might just wind up being a Wildcard team that nobody wants to face in the playoffs. The ANY/A stats say that certainly could be the case.