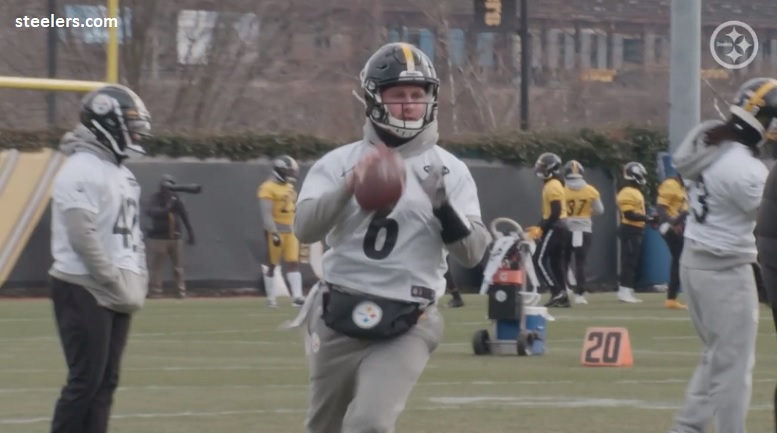 The Pittsburgh Steelers will play their final regular season home game Sunday night against the Buffalo Bills and as you would probably expect in the middle of December in Pennsylvania, it will be frigidly cold. Current weather forecasts are calling for a Sunday night temperature at Heinz Field in the middle 20’s with slight chance of snow. On Wednesday, Steelers quarterback Devlin Hodges was asked to give his thoughts on the impending cold weather game Sunday night and the rookie undrafted free agent out of Samford did not disappoint with his response.

🗣 @DevlinHodges10 speaks about adjusting to the cold weather, the Bills' defense, working with the wide receivers and more. pic.twitter.com/wCJd74XLPk

Hodges went on to say Wednesday afternoon that the coldest game he’s played in to date was Samford’s 2016 NCAA FCS playoff game against Youngstown State in Youngstown, Ohio. The gamebook from that 2016 playoff contest shows that it was 40 degrees on that day with 5-10 mph winds. Hodges completed 33 of his 51 total pass attempts for 372 yards and three touchdowns and no interceptions in what was ultimately a 38-24 loss.

“We did play in Youngstown, Ohio one time, so I have played in the cold weather before,” Hodges said Wednesday. “You know, I mean it’s cold out there, but once I get out there and get going and get active, I’m not really cold. I’m out there sweating and the body heat and everything, so it’s going to be fine.”

Even though he’s from Alabama, Hodges experience over the years duck hunting in northern areas during the winter also has him used to the cold weather.

“Being a big hunter, [I’m] used to the cold,” Hodges said on Wednesday. “No problem at all.”

Sunday night at Heinz Field, Hodges will be hunting Buffalo’s defense and them him. The Bills defense should be the toughest one that Hodges and the rest of the Steelers offense has played against since Week 1. Hodges was essentially asked to confirm that being the case on Wednesday during his media session.

“Yeah, it is just because the simple fact it’s the only defense we play this week,” Hodges said. “I’m just big on taking it one week at a time. They’re a good defense. We’ve played a lot of good defenses, but you know, we’ve got control what we can control, and we have to come out and execute what we can execute.”

The Steelers playing Sunday night also means they’ll be playing on national television. However, Hodges doesn’t see that being much of a concern to him, either, because of his first career start also taking place on the Sunday night main stage back in Week 6 on the road against the Los Angeles Chargers.

“Yeah, I mean it’s primetime, I think the first start that I had against the Chargers was primetime, too,” Hodges said. “It’s just another football game and got to treat it like just another week and go out there and have fun and do the best we can do and execute and just enjoy the opportunity.”

Hodges has the opportunity Sunday night to become the first rookie undrafted quarterback in the history of the NFL to win his first four starts. If he manages to pull off that feat at Heinz Field, not only will the Steelers enter the final two weeks of the regular season as the No. 5 seed in the AFC, Hodges’ legend will grow even larger than it already is right now.

Yes, Duck Mania will be at an all-time high Sunday night should the Steelers beat the Bills at home and while it might be frigid cold at Heinz Field after the game, the warmth associated with Pittsburgh being another step closer to making the playoffs will keep fans unseasonable warm for at least another week.