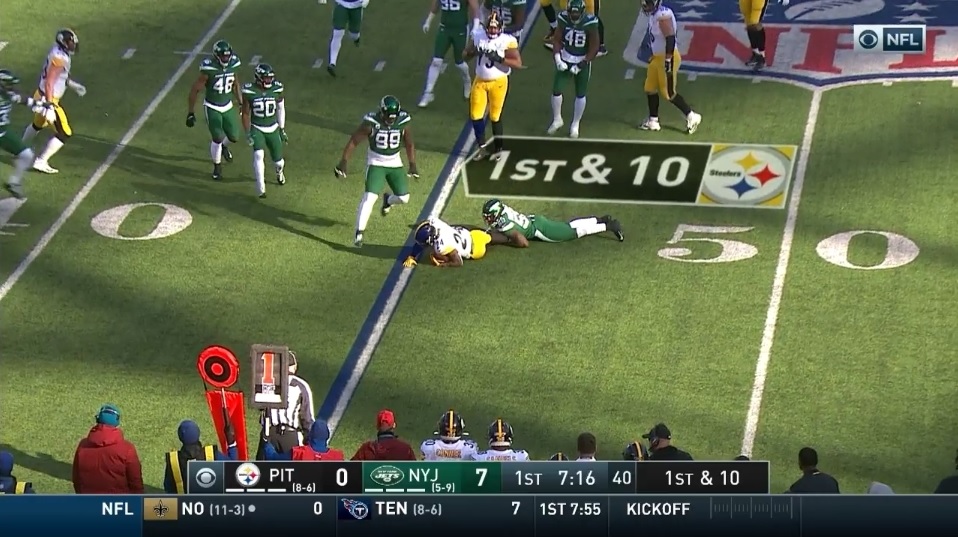 Mike Tomlin was asked at his Tuesday presser why the Pittsburgh Steelers’ run game hasn’t been effective over the last two weeks. Here was his response.

“Because we’ve got young quarterbacks and young wide receivers and people packed the box and we could perform better.”

I imagine Tomlin knows that’s a bad, brush-off answer. I sure hope he does. Because on most levels, it’s not true.

Just a couple weeks ago, the run game was humming. 120+ yard performances against the Bengals, Browns, and Cardinals, the first time it’s happened in five years. The Steelers didn’t have a veteran QB in those games. It was the height of Duck Mania. Same receivers too.

So on the surface, we know that’s not true.

What about the box being stacked? More palatable but there’s problems with that explanation too. The Steelers invited teams to pack the box by using plenty of heavy sets. 12 personnel with two tight ends, 12/13 personnel with Zach Banner in the game. Of course teams are going to play the run when #72 is eligible. Pittsburgh runs the ball in about 85% of those situations.

There’s a difference between “stacked box” and “box count.” If your offense goes heavy with say, eight primary blockers (13 personnel with five linemen, three tight ends) and the offense drops eight into the box, the box count is even. Have as many blockers as they have defenders near the LOS. Which is often the case and makes the “stacked box” argument moot. Box count is the thing to look at in the run game.

Still, there’s even a broader issue. There are plenty of moments where the Steelers have enough guys to block it up. The problem is within the scheme and individual struggles. That was evident in the Jets’ loss, where Pittsburgh averaged exactly 3.0 yards per carry. We’re going to check out those struggles and show how bad scheme is costing the Steelers from having legitimately successful runs and how miscommunication and lack of talent is hindering things as well.

Too often, the scheme called for players to make 2nd level blocks that are simply impossible to make. Steelers running power scheme, RG David DeCastro pulling right to left. Everything to the frontside gets blocked up, DeCastro kicks out the OLB and there’s a lane for Benny Snell.

Only one problem. Zach Banner, lined up to the right side, is responsible for the Mack linebacker. With the play going away from Banner to the offense’s left, he has no chance to make this block. Linebacker reads his keys and follows the pulling guard across the formation.

Banner has no choice but to leave his assignment and climb to the third level. Linebacker is free in the hole and makes the tackle.

If the Mack is taken care of, this thing is blocked up perfectly. And Snell has a long ways to run. Instead, it’s a loss of one. An adjustment is probably tough here but asking Ramon Foster to climb to the second level is much more feasible than Banner. There’s no need for the team to worry about blocking the backside linebacker here. Run is going away and Hodges rolling out can hold him long enough so the defender can’t chase the play down from behind. Inability to adjust to the front is the problem here. Blocking scheme can’t be one-size-fits-all.

It wasn’t all on scheme either. There was flat out poor communication and mix-ups in assignment. Deon Cain gets motioned in as a wing player. But he and TE Nick Vanett take the same play, #33 Jamal Adams, and neither picks up the LB, #51. LB is free to get downhill and make the tackle, giving Snell no chance to make this play.

My assumption is that Vannett should’ve executed a down block here to seal #51 while Cain digs out Adams. But the point that matters is poor communication screwed up this run before it got going and puts the offense off schedule, something they can’t afford to be.

Same issue here. Have enough guys to block this up. The Jets stacking the box (which they are but only because Pittsburgh’s in 13 personnel) isn’t the problem. Maurkice Pouncey and Banner attack the same defender, the Buck LB, while Adams remains unblocked and makes the tackle in the hole.

The GIF doesn’t show it but the NT shifted from being head up to shaded over Pouncey shortly before the snap. So I’m guessing that fact allowed Pouncey to now climb to the 2nd level, which should’ve changed Banner’s assignment. But that never got recognized/communicated and the run, which would’ve had promise otherwise, is dead on arrival.

Then there’s some grey area. Ones where you can argue scheme and player ability/execution. Similar issue as we’ve shown above, asking guards to work to the second level and climb to LBs with the play going away. Difficult assignment here for LG Ramon Foster.

But you can feel the lack of athleticism here from Foster. He’s never been a particularly mobile guy but you’re starting to feel limited by what you can do with him in your blocking scheme. Again, the LB is unblocked and meets Kerrith Whyte in the hole for a short gain.

The frontside of this play is blocked well. The backside isn’t taken care of and that’s how you get only a three yard gain instead of potentially, if Whyte makes Adams miss, a game-changing run.

Same story here. Foster trying to climb to #58. Can’t do it with the run going away. His steps look poor here too, not getting upfield and then trying to chip #95 before getting upfield. Doesn’t help his case in trying to make this block. LB is free to read the play and yet again, makes the tackle. David DeCastro also loses his block at the end here, too.

So we’re seeing a lot of issues here. Questions about the scheme, how Pittsburgh is able to adjust to different fronts, going back to the lack of problem solving we discussed with the Steelers’ pass protection last week. There are player breakdowns, miscommunication, and you can feel the age of the group, mainly around Foster, whose future with the team will be called into question come the offseason.

The one thing that isn’t a problem? The youth of the QB or defenses stacking the box. Pittsburgh simply isn’t scheming and executing well enough.