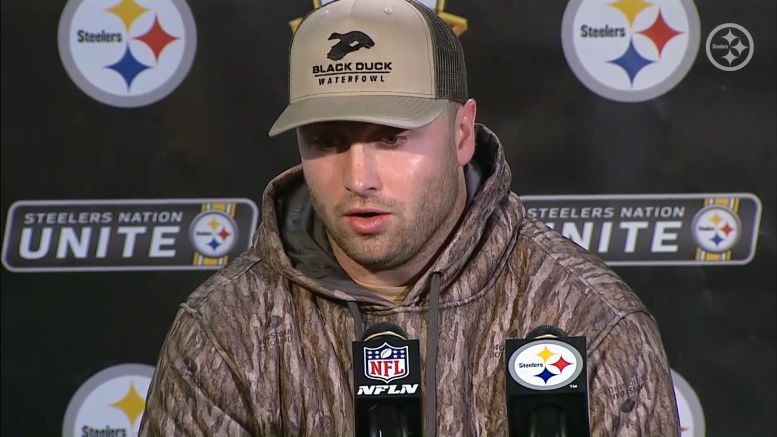 Whatcha gonna do, brother, when Duckmania runs wild on you? Well, go duck hunting, of course. And in some new hunting swag, to boot.

According to Pittsburgh Steelers starting quarterback Devlin Hodges, that’s basically the only thing that is different since he was put into the game against the Cincinnati Bengals a week and a half ago. He helped lead a comeback win after Mason Rudolph was benched, then started and won on Sunday against the Cleveland Browns.

On Tuesday, head coach Mike Tomlin announced that Hodges would continue to start on Sunday against the Arizona Cardinals, to nobody’s surprise, and since then, he’s been taking the opportunity to explore some of the community, including currying favor at a Pittsburgh Penguins game.

Reporters asked him yesterday how much his life has changed over the course of the past couple of weeks. He gave exactly the answer you would think he would give. “It hasn’t changed”, he said, via a transcript. “I might have gotten some free duck hunting stuff sent to me, but other than that I am still Duck, I am still the same person I was a month ago”.

Hodges, whose nickname of ‘Duck’ of course stems from the fact that he is not only an avid duck hunter but a world-class duck caller, has been using his down time in recent weeks to take in his favorite side hobby, taking along James Washington to get some hunting in between games.

That’s nothing new for him, nor is it out of the ordinary for players to engage in activities during their time off during the week—though not necessarily duck hunting, of course. As he prepares now for his third start, however, things are no different than they were two weeks ago. He simply has played more than he otherwise had been.

“If you would have asked me five or six years ago or the first couple games I’d say, “man, this is wild, a quarterback named Duck”, he said about the rise of his cult status. “But now, it’s cool. It is something that has caught on and something that I have kind of embraced. It is awesome when fans come up and they are like, “hey Duck, what’s up? Duck what are you up to?” Then if someone calls me Devlin it kind of catches me by surprise”.

One thing is for sure, he may end up being one of the most famous people to bear the nickname of Duck. At least among those who are real-life actual human beings. As for the rest, some free hunting gear is nice, but otherwise, it’s all just life.