The NFL released the initial selection order for the first-round of the 2020 draft for the teams that failed to make the playoffs on Monday and the Pittsburgh Steelers selection that they traded away to the Miami Dolphins for safety Minkah Fitzpatrick is 18th overall.

The Cincinnati Bengals own the No. 1 pick of the 2020 NFL Draft, which will be held April 23-25 in Las Vegas, Nevada. The tentative order of the first round was announced on Monday subject to the results of the playoffs.

The draft order is determined by the following procedures:

(B)          The losers of the Conference Championship games shall select 29th and 30th in all rounds, according to the reverse order of their standing.

(C)          The losers of the Divisional playoff games shall select in the 25th through 28th positions in all rounds, according to the reverse order of their standing.

(D)          The losers of the Wild Card games shall select in the 21st through 24th positions in all rounds, according to the reverse order of their standing.

(E)          Clubs not participating in the playoffs shall select in the first through 20th positions in all rounds, according to the reverse order of their standing.

If, after all the foregoing procedures have been applied, ties still exist in any grouping except (A) above, such ties shall be broken by figuring the aggregate won-lost-tied percentage of each involved club’s regular-season opponents and awarding preferential selection order to the club that faced the schedule of teams with the lowest aggregate won-lost-tied percentage.

If ties still exist between teams in the same division or the same conference, the divisional or conference tie-breaking method shall be used, whichever is applicable.

If ties still exist, the procedures for breaking ties for teams of different conferences shall be applied.

Clubs involved in two-club ties will alternate positions from round to round. In ties that involve three or more clubs, the club at the top of a tied segment in a given round will move to the bottom of the segment for the next round, while all other clubs in the segment move up one position. This rotation continues throughout the Draft.

If I am reading the procedures correctly, the Steelers pick in the second-round should be 49th overall, or 17th overall in the second-round. The team doesn’t currently own a third-round selection but they are expected to receive a compensatory selection in that round based on the NFL’s formula for free agency adds and losses last offseason.

Below are the details that the NFL has on the trade between the Steelers and Dolphins that was made in September that included Fitzpatrick. 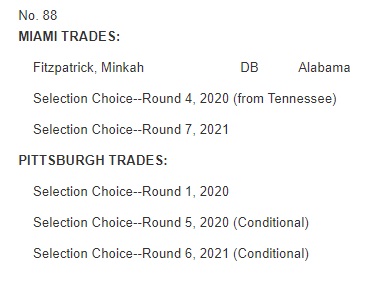 The NFL just announced the 2020 Draft first round order for the teams who finished their 2019 seasons on Sunday. The first-round pick the #Steelers traded to the #Dolphins for S Minkah Fitzpatrick winds up being No. 18 overall. pic.twitter.com/yOp0Y8EZqe