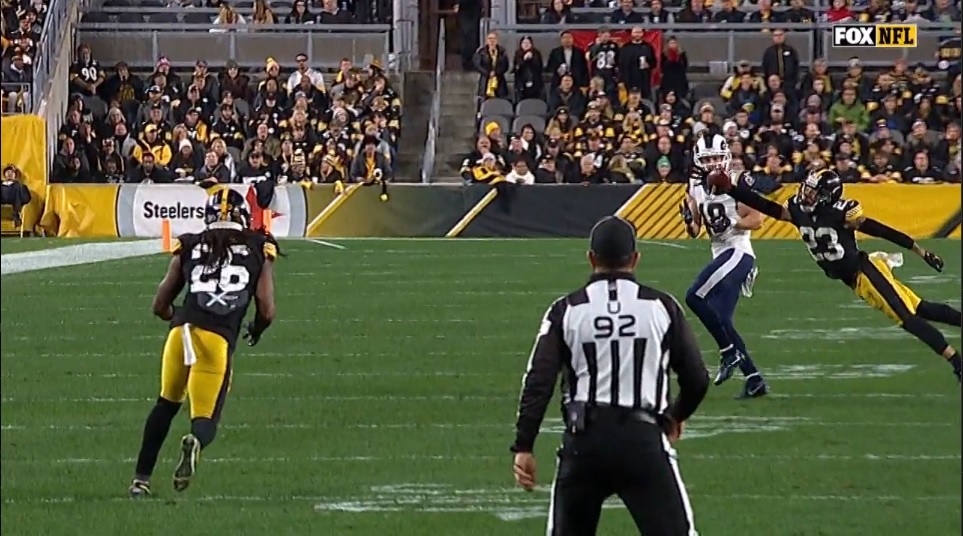 Usually when teams face a top player, the goal is to slow them down. Limit damage. No big plays, no touchdowns. Do that and you consider it a win.

They shut him down.

And I mean that literally. Kupp was held off the stat sheet. No receptions, no yards, and definitely no touchdowns. Asked about it after the game, Mike Tomlin even seemed surprise by how well the secondary did holding Kupp in check.

“Is that true?” Tomlin said when a reporter told him of Kupp’s disappearing act. “Man, we doubled him a lot. You know, he’s the number one receiver in the NFL on third down and so all our third down discussions start there. Minimizing his, his ability to impact the game in that way. And then kind of working out from there.”

Kupp was coming off a seven catch, 203 yard, one touchdown performance against the Bengals in Los Angeles’ last game. Sunday was a totally different story.

At Tuesday’s press conference, Tomlin pointed to Kupp’s dominance on third down. Coming into this weekend, no player had more third down receptions (21) or conversions (17) than Kupp. But the Steelers made every effort to take him away. It resulted in an all-time performance on third down, holding the Rams to converting just once on 14 tries.

It also forced the Rams to rely on other options to create plays in the passing game. Without Brandin Cooks, their top deep threat, the other weapons didn’t step up. Robert Woods and Gerald Everett made plays underneath but didn’t get loose downfield and failed to move the sticks in crucial situations.

While it was Minkah Fitzpatrick who will dominate the headlines with another interception and touchdown, the corners deserve much of the credit for ruining Kupp’s day. Joe Haden had one of his best performances in a Steelers’ uniform, right up there with the Patriots’ game last year, while Steven Nelson and Mike Hilton were excellent too.

Pittsburgh’s mission was to take away the Rams’ best players. They did that. Kupp was shut out and Todd Gurley had only an average performance, busting off a couple decent runs but nothing that proved fatal to the Steelers’ defense. That’s why the Steelers’ defense was so dominant and why they’re celebrating a win heading into a short week against Cleveland.