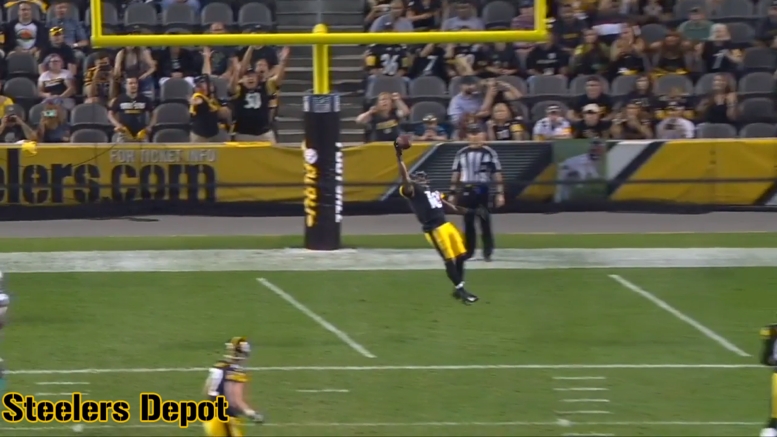 The Pittsburgh Steelers made a few more transactions on Monday as a few wide receivers were added to the team’s practice squad.

The Steelers signed wide receivers Quadree Henderson and Amara Darboh to the team’s practice squad on Monday and released outside linebacker Sutton Smith and wide receiver Terry Wright to make room for them both.

Henderson, a Pittsburgh product, was originally signed by the Steelers in 2018 an undrafted free agent. After he failed to make the 53-man roster out of training camp, Henderson eventually landed on the practice squad of the New York Giants. The Giants promoted Henderson to their 53-man roster last November but a shoulder injury ended his rookie season later that month.

Henderson has gone on to spend time on the offseason rosters of the New York Jets and Jacksonville Jaguars and he was most recently on the practice squad of the Carolina Panthers this season. Henderson is primarily a kickoff and punt returner and he does not have a reception yet in the NFL. Last season wit the Giants, Henderson returned nine punts for 68 yards with a long of 21 yards and five kickoffs for 112 yards with a long of 30 yards.

As for Darboh, he was originally drafted by the Seattle Seahawks in the 3rd round (106th Overall) in 2017. He has since been on the roster of the Tampa Bay Buccaneers. In his rookie season with the Seahawks, Darboh caught eight passes for 71 yards.

The Steelers loading up on wide receivers since their Thursday night game against the Cleveland Browns is likely mostly related to JuJu Smith-Schuster and Diontae Johnson both currently dealing with concussions suffered in that contest. On Saturday, the Steelers signed wide receiver Deon Cain off the Indianapolis Colts practice squad.