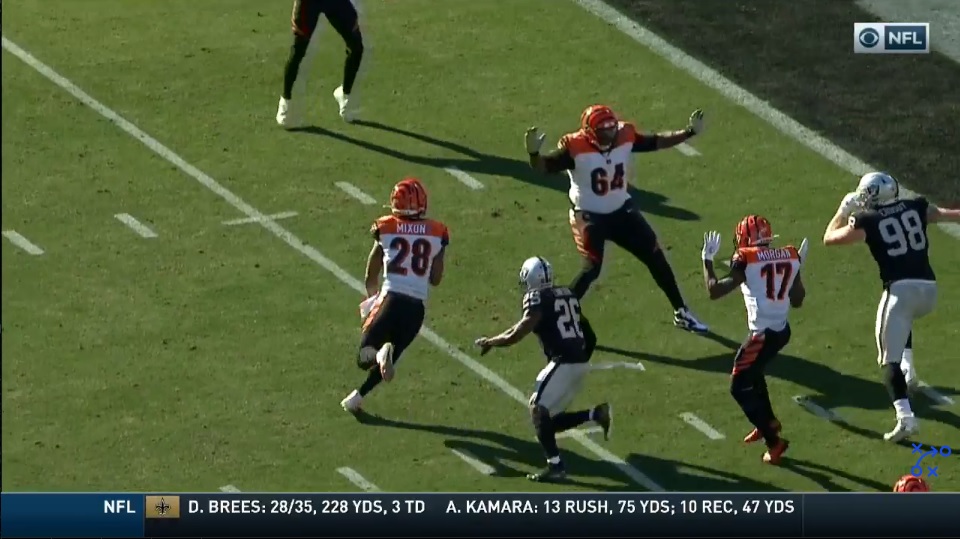 For a winless teams that’s objectively bad on paper, their run game isn’t bad. It’s arguably the best part of the entire team. Joe Mixon is still the guy, having more success lately, though half the time, it feels like he’s given up on his offensive line – hey, tough to argue when John Jerry is your starting left tackle – and does his own thing. I know Josh will touch on the individual plays in a moment but this one made me laugh.

What looks like an outside/power scheme, the center pulling across to the right. Mixon immediately says nope and abandons the scheme, darting upfield for a big gain. I don’t blame him.

To the numbers. Mixon is averaging just 3.6 yards per carry on the season but sits at 4.3 over the last three weeks. In their first meeting against the Steelers, he carried the ball 15 times for 62 yards.

Gio Bernard has gotten involved more the last few weeks. Like the Browns, they’ll run some Pony sets with both guys on the field. That idea will likely be heightened if AJ Green doesn’t return and WR Auden Tate fails to play, the latter thinning out an already weak receiver corps.

Receivers will get involved in the run game though. Bengals like to run tosses to Mixon but work off it with this fake toss/jet to guys like Tyler Boyd and Alex Erickson, two guys who ran the ball to huge success in high school. Boyd had over 2500 yards rushing as a senior while Erickson put up a more modest, but still excellent, 1239.

Run game tries to get the ball outside. Let Mixon take tosses, get depth, and use his vision to find the hole. He’s the catalyst behind that poor offensive line. Tosses and pin/pull schemes.

New QB Ryan Finley is a running threat and they’ll do more read option plays with him. He’s a threat with his legs on designed runs or taking off if coverage is strong. Run game has 26 gains of 10+ yards, about average in football. 3rd down offense is similarly average, 38.1%, but the red zone offense has suffered all year. 30th in the league, finding the end zone just 35.7%. It’d be funnier if the Steelers weren’t 28th in that category.

One last thing. Rookie guard Michael Jordan, the man Cam Heyward dominated in the first matchup, has been sent to the bench but is still used as a 6th offensive linemen in heavy packages. He wears #60.

Finley, a rookie from NC State, will get his first taste of the Steelers. Been the Bengals’ starter for the last two weeks. The numbers aren’t pretty. 47% completion rate, a shockingly low figure, one touchdown, two interceptions, and seven sacks.

But they’re not playing hyper conservative with him either. Opened up last week against the Raiders with four straight passes, though that fourth play ended with a sack/lost fumble, and they’ll go empty set and try to open up the offense. Don’t be surprised if Cincinnati comes out relatively aggressive. At this point, officially eliminated from the playoffs, there’s nothing to lose.

Finding out who they will throw the ball too, though, is murky. AJ Green’s status as of this writing is up in the air, Auden Tate suffered a scary injury, and Tyler Boyd has just seven grabs of his last two games, including a one-reception contest in last Sunday’s loss to Oakland. Only two players this season have more than one touchdown grab. Mixon with three, tight end Tyler Eifert with two.

It’s led to a pass game that hasn’t been explosive, just 32 completions of 20+ yards, 19th in football, and one that isn’t getting better under Finley. Just three of those since he took over.

Gio Bernard may be a sneaky weapon in the pass game. They’ll send him out of the backfield or in the slot to run option routes on linebackers. Devin Bush, Mark Barron, and Vince Williams will be tested. He doesn’t get the ball in these clips but you see the threat #25 poses.

If the Bengals get into the red zone, watch out for the tight end wheel to Eifert. Saw it each of the last two weeks. #1 runs a curl to try to create a pick, Eifert runs an out ‘n up towards the sideline. Both plays occurred on 2nd and goal from the six and seven yard line.

With that comes another tough AFC North road test, this time with a trip to Cincinnati.

Yes, the Bengals are dreadful and arguably the worst team in the NFL, but that doesn’t make the road trip to the Queen City an easier, especially with how decimated the Steelers are across the board with injuries.

That said, if there’s a team to face where you’re trying to get healthy, it’s the Bengals as Cincinnati has one of the worst offenses in the league, recently benched longtime starting quarterback Andy Dalton and inserted rookie fourth-round pick Ryan Finley in a year where it’s obvious the Bengals are trying to suck.

Credit to running back Joe Mixon though, who has really gotten it going on the ground in recent weeks, largely due to success on toss sweeps.

There’s very little chance of having success on the ground right now between the tackles for the Bengals, but getting the ball to Mixon on the move in space has worked wonders. He’s rushed for 200 yards in his last two games combined and has really helped carry the offensive output.

I like the design here on the pitchout against the Baltimore Ravens in Week 10. Cincinnati plays the motion up right to left, drawing the linebackers eyes. Then Finley pitches it out to his right where Mixon has right tackle Bobby Hart and right guard John Miller out in front opening up a monster lane to get him into the secondary.

The very next week on the road against the Raiders, the Bengals run a very similar toss to the right with Mixon.

Miller pulls, as does center Trey Hopkins, allowing a kickout by Miller and turn upfield from Hopkins that gives Mixon a lane to rip off a 30-yard run, which was the longest of the season for the Bengals.

More often than not the Bengals are having their most success on the ground behind the right side of the line with Miller and Hart. Interestingly enough that will play right into TJ Watt’s territory, who has been really good against the run this year and usually eats Hart’s lunch each time they face off.

Aside from Mixon’s exploits as a runner in the last few weeks, he’s really becoming a dynamic receiving back for Finley, serving as a security blanket for the rookie quarterback.

When in doubt, get the ball to Mixon in space.

This play breaks down quickly, forcing Finley to buy time in the pocket. Wanting to get rid of the football, Finley checks down to Mixon, who makes a Ravens defender miss and rips off a 25-yard catch-and-run. One-on-one, Mixon is going to win a majority of the time.

While Finley simply can’t be considered the long-term answer for the Bengals – especially if they secure the No. 1 overall pick – he has made some nice throws on tape, flashed some toughness and mobility, and generally appeared poised.

Against the Ravens that game got out of hand in a hurry thanks to the Bengals’ defense being unable to slow down Lamar Jackson, and a pick-6 thrown by Finley, he stayed composed and tried to keep the Bengals in it.

This throw here showed some serious arm strength and good pocket presence to slide and open up a window.

That’s a seed from Finley to Tyler Boyd, who has struggled to produce with Finley like he was with Dalton.

I like that Finley has the confidence to fire this ball into this tight window between two defenders into the middle of the field. That’s certainly one to build on.

Then, in the red zone he’s learned to give his guys a chance to make a play

One thing with young quarterbacks is that they appear hesitant to make 50/50 throws like this, especially in the red zone. Finley knows Tyler Eifert has a favorable matchup and gives him a shot. It results in 6 points.

Eifert has been quiet this year, but he’s still playing well, giving the Bengals a solid receiving option in the middle of the field.

Overall with this Bengals offense, I do like their skill guys a ton. Mixon has matured into a solid starting running back that would get much more attention if he was on a decent team, while guys like Boyd, Auden Tate and Alex Erickson are having pretty solid seasons.

Tate likely won’t play on Sunday, considering he’s in a neck brace after suffering a concussion on the road in Oakland. That’s a break for the Steelers because Tate is a big, physical receiver that excels at the catch point.

It will be tough to score points on Sunday if the Bengals can’t run the football with any sense of consistency, and if Finley hands the Steelers a couple of turnovers without one of his top weapons.

Along with that, the offensive line – one of the worst in football – could really hinder the Bengals. Here’s how I expect them to line up left to right on Sunday:

If you’ve been reading me on this site for the last few years, you know exactly how I feel about Hart. He’s arguably the worst right tackle in football.

Billy Price has been mostly a mess at left guard. I loved him coming out of Ohio State but he’s simply nowhere close to the player I thought he’d be.

Miller and Hopkins are having strong years and look like potential building blocks for the Bengals moving forward. Miller is the old-school guard that has a nasty streak and really excels going forward in the run game.

The good news for the Bengals is that they should get Cordy Glenn back this week at left guard, replacing John Jerry who has been an absolute dumpster fire at left tackle in recent weeks.

Glenn did struggle in Week 4 against Bud Dupree though, so we’ll see.

On special teams, Randy Bullock and Kevin Huber are having mostly average seasons at kicker and punter. They’re not going to change games at this point for the Bengals.

Erickson is a terrific returner. He’s not a household name, but he’s super solid and consistently has success against the Steelers.

Brandon Wilson has emerged as an electrifying kick returner this year, which is positive for the Bengals. Wilson has a kick return for a touchdown already this year and is averaging an absurd 35 yards per kick return.