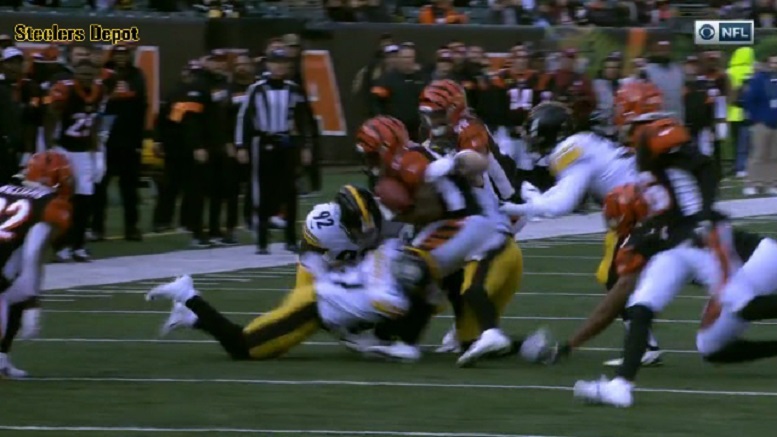 Pittsburgh Steelers outside linebacker Olasunkanmi Adeniyi was reportedly fined this past week for an illegal action that took place in the team’s Week 12 Sunday road win against the Cincinnati Bengals.

According to Tom Pelissero of the NFL Network on Saturday, Adeniyi was fined $56,156 this past week for unnecessary roughness as a result of him lowering his head to initiate contact on a kickoff in the Steelers Sunday’s game against the Bengals.

#Steelers LB Ola Adeniyi was fined $56,156 for unnecessary roughness — lowering the head to initiate contact on a kickoff in last week's win over the #Bengals. He previously was fined $28,075 for doing the same thing on a punt last week, a play that left him with a concussion.

While Pelissero isn’t specific as to which Steelers kickoff that Adeniyi committed the infraction on this past Sunday, it appears to have been the opening one of the game.

Pelissero also reports on Saturday that Adeniyi was previously fined $28,075 last week for doing the same thing on a punt in the Steelers Week 11 Thursday night road loss to the Cleveland Browns.

That illegal hit against the Browns, which happened during the Steelers first punt of the game, resulted in Adeniyi suffering a concussion and being held out for the remainder of the game.

Additionally, Steelers running back Trey Edmunds was reportedly fined $28,075 for a blindside block on a kickoff return in the second quarter last Sunday against the Bengals.