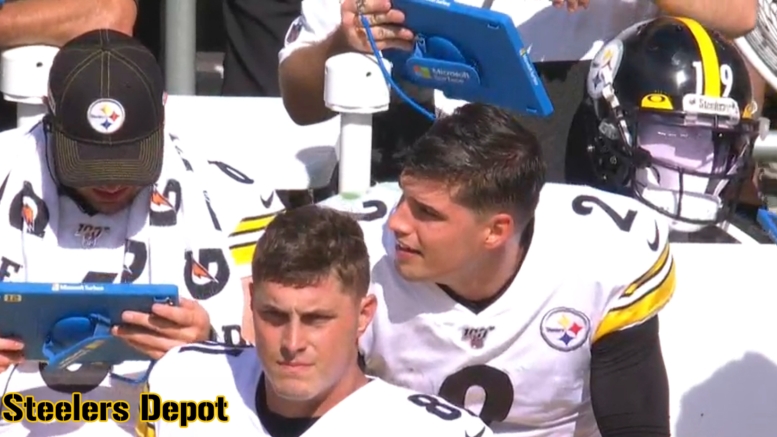 While it should go without saying, it doesn’t help any quarterback to have a constant rotation of players at the skill positions forced upon him by injury, and occasionally by underperformance. It makes it vastly worse when the quarterback is a young player still learning what he’s doing, let alone who he is working with.

That is the state the Pittsburgh Steelers are in with Mason Rudolph right now, who will be spending time tomorrow throwing passes to Deon Cain and Tevin Jones, both of whom were on practice squads a short time ago. Maybe a ball will go the way of new running back Kerrith Whyte, as well. He already replayed Tony Brooks-James, who spent a few weeks on the roster.

“I think if you ask any quarterback, you might feel that way”, offensive coordinator Randy Fichtner said  of the rotation of personnel being a detriment to the development of a young quarterback, via a transcript from the team’s media department.

While he did allow that, he also refused to let it be an excuse, and put Rudolph’s share of the blame on his shoulders, saying there were “a couple throws he’d like to have back”. He added, “I know it had nothing to do with who was running the route and those type of things. It has everything to do with where you put the ball and the decision you made, and there’s going to be times in a competitive guy who you have to know when to say when”.

By and large, Rudolph has actually known when to say when, or at least has rarely saw ‘now’, when referring to taking chances with the ball. Entering Thursday’s game, only two of the four interceptions that he had thrown were his responsibility, and he has otherwise had few interceptable passes. That changed in dramatic fashion when he threw four interceptions, all on his shoulders, that night.

In other words, Fichtner’s message to his young quarterback is clear: it doesn’t matter who you’re throwing the ball to. You still have to make your plays without pressing and making mistakes. Are Cain and Johnny Holton going to catch every pass that hits their hands? Surely you jest with that suggestion.

But as the quarterback, it’s up to that position to absorb those mistakes and make up for them, to make better decisions, to put his players in better positions to make plays. That’s the mindset, at least. We know skill position players make mistakes, but the quarterback can’t think, ‘that wasn’t on me’. And Fichtner isn’t letting that take rook in Rudolph.