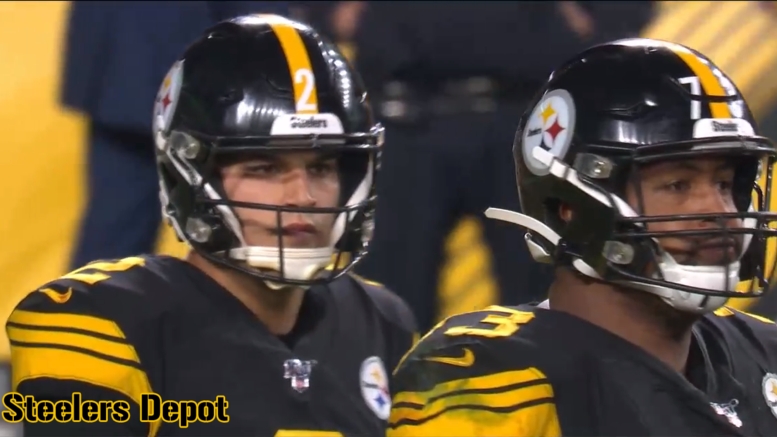 While Pittsburgh Steelers quarterback Mason Rudolph will enter the team’s Sunday home game against the Los Angeles Rams 3-2 in games that he’s started this season, the Oklahoma State product is still very much trying to find an even footing when it comes to his overall play. However, while Rudolph has yet to show any consistent success when it comes to things like starting games off strong and pushing the football down the field, guard Ramon Foster made it clear in his Tuesday interview on 93.7 The Fan that the team isn’t worried about where the young player is at currently in his development as an NFL quarterback.

“That’s the thing about it, each week can be different,” Foster said when asked to describe what he’s seen so far out of Rudolph that would lead him to believe he’s moving in the right direction in his development as a quarterback. “So, you know, he can probably light it up this week, you know, but that’s yet to be seen. And he’s a guy, he’s learning. There’s a lot of pressure. He’s the youngest guy, probably one of the youngest guys on the entire offense, and he’s trying to figure it out at the lead position. So, we take no issue with how Mason plays in the game.”

Foster did, however, credit the play of the Steelers defense so far this season in helping the team overcome the wildly inconsistent play of the offense since Rudolph took over for injured starting quarterback Ben Roethlisberger and that’s certainly understandable.

“You know, the best thing I think that we have going for us is how good our defense has been in supporting us to work through those issues,” Foster said. So, there is no bother. Nobody’s really looking side to side at him, it’s just we know that’s a growing position.”

Foster also offered up some more positive words regarding Rudolph and how maybe slow and steady improvements made by him in his overall game might be the best thing for him in the long run.

“You don’t become a superstar overnight,” Foster said. “And sometimes if you do start too fast, that means your crash can be a whole lot harder than you expect. So, we’re working with Mason and I think he’s going to be really good for the rest of the season.”

The rest of the Steelers season starts Sunday at home against the Rams and against a great Los Angeles defense that includes premier players in defensive tackle Aaron Donald and cornerback Jalen Ramsey, just to name a few. Tomlin highlighted the challenges that Rudolph and the rest of the Steelers offense will face on Sunday against the Rams defense.

“Collectively, though, they’ve just got a really formidable bunch,” Tomlin said of the Rams defense. “You better stay on schedule. You better be able to do that. If you’re behind the chains, you’re swimming in shark infested waters with this rush and the people that I just mentioned that that comprise the back end.”

So, will we see yet another game on Sunday with the main focus of the offense being to limit the exposure of Rudolph to an opposing defense? In short, will we see a lot more of the dink-and-dunk passing from Rudolph with very few attempts to push the football down the field in the air? On Tuesday, Tomlin was asked if Rudolph might air it out some against the Rams like he occasionally did in the Sunday win over the Colts and if the game plan in that contest this past Sunday was designed for him to do that.

“I don’t know that we were any different in terms of how we approached it,” Tomlin said. “Oftentimes how the defense plays, and particularly how they employ coverage, one-high safety, two-high safety zone and man oftentimes dictates where the ball goes and not necessarily the play call.”

The Steelers are currently 3.5-point consensus home underdogs to the Rams and that’s not overly surprising when you consider Rudolph and the the defense he’ll be facing on Sunday. For the Steelers to win that Sunday game the team’s defense will likely have to carry most of the load once again and Rudolph will probably need to have one of his best starts to date. If Rudolph can provide that, it will mark a huge data point in his development as a young quarterback.