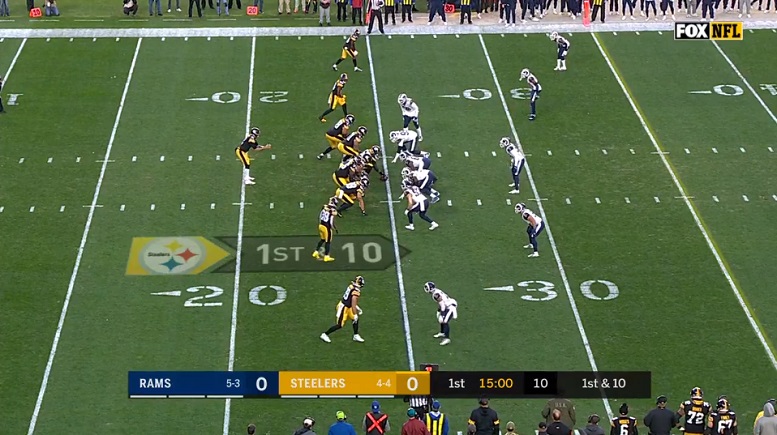 To say that the Pittsburgh Steelers offense is fragile as the team enters Week 11 might be a bit of an understatement. While the team is averaging 21.4 points per game through nine games played, a good chunk of the 193 total points scored have come as a direct result of turnovers. While the Steelers offense could stand to make improvements in several statistical categories in the team’s final seven regular season games, a good place to start would be on 1st and 10 plays.

The team’s running game has been equally unimpressive on that down and distance from Week 3 and on as the 90 total runs have averaged 4.4 yards. Just 36 of 90 1st and 10 rushing attempts have gained 4 yards or more for a dismal success rate of 40%. If it’s any consolation, Steelers running back James Conner, who has missed the last two games with a shoulder injury, has a slightly better 1st and 10 successful run rate of 43% from Week 3 and on.

As you’ve probably already figured out by now, the Steelers offense has faced a good amount of 2nd and longs since Roethlisberger went down injured and that’s obviously doesn’t help a young quarterback such as Rudolph, who is surrounded by several young wide receivers. In total, the Steelers offense has faced 2nd and 7 to 10 yards to go 87 times from Week 3 forward and just 21.8% of those plays netted a first down or touchdown. The average gain on those 87 plays has been just 5.2 yards and you guessed it, that ranks near the bottom of the league from Week 3 forward.

Thursday night against the Cleveland Browns the Steelers offense will face a defense that is last in the league in yards allowed on 1st and 10 plays with 7.0 average. Against the run on 1st and 10s this season the Browns defense has allowed 5.9 per attempt and that’s last in the NFL as well entering Week 11 of the regular season. Opposing running backs, specially, have averaged 5.7 yards per attempt against the Browns defense this season so if there were ever a good time to have a healthy Conner back on the field it’s Thursday night.

Should the Steelers offense fail to have success on 1st and 10s against the Browns Thursday night in Cleveland the team could be in for a tight game with the outcome of it likely depending on the defense having yet another great game complete with that unit providing great field position or points.

In closing, if the Steelers offense can’t find regular success on 1st and 10s against the Browns defense Thursday night, one then must start to wonder if the unit will have any increased success in that key statistical category in the team’s final six games. Rest assured, I’ll be tracking 1st and 10s closely Thursday night as should all of you. This offense must make strides on that down and distance Thursday night in Cleveland to help the unit become a little less fragile overall.