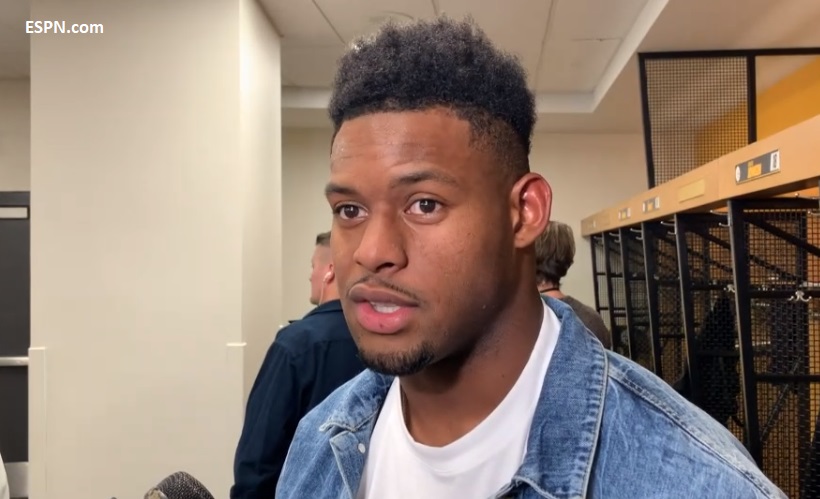 A few days ago, Los Angeles Rams cornerback Jalen Ramsey previewed his forthcoming Sunday matchup against Pittsburgh Steelers wide receiver JuJu Smith-Schuster and he respectfully tried to say that the third-year player is not yet on the same level as his former teammate, wide receiver Antonio Brown.

“No disrespect to him, he’s not Antonio Brown,” Ramsey said of Smith-Schuster on Friday. … “Now I’m going up against a different person, different body type, different receiver a little bit. He can make plays. But I’m going to play my game. Not really worried about it.”

The two faced off quite a bit on Sunday and Smith-Schuster finished the game with three receptions for 44 yards on six total targets. In Smith-Schuster’s defense, the Rams seemingly double-covered him quite a bit during Sunday’s game. That said, Smith-Schuster did let an early-game pass go right through his hands for a drop.

After the Sunday game was over, Smith-Schuster was asked about what it was like to face-off against Ramsey.

“It was cool, man, he talks a lot, so much,” Smith-Schuster said of Ramsey. “He said so many cuss words I’ve never heard of and I’m 22 years old. But he’s a good player, man.”

Smith-Schuster was also asked to comment on Ramsey saying on Friday that the Steelers young wide receiver is not on the same level of his former teammate, Brown.

“He’s right, though, I’m not Antonio Brown,” Smith-Schuster said. “I will never be Antonio Brown, I am myself. I’m JuJu Smith-Schuster. I’m not as good as him yet. I think I still have time to proceed to get to his level, but we’re two totally different persons.”

Will this be the last time we see Smith-Schuster and Ramsey square off against each other for a while? It’s possible unless the Steelers and Rams meet in the Super Bowl over the course of the next few seasons or Ramsey winds up being traded to a different team. If and when Smith-Schuster and Ramsey do ever face-off against each other down the road, I suspect the former will be a much better player by then.