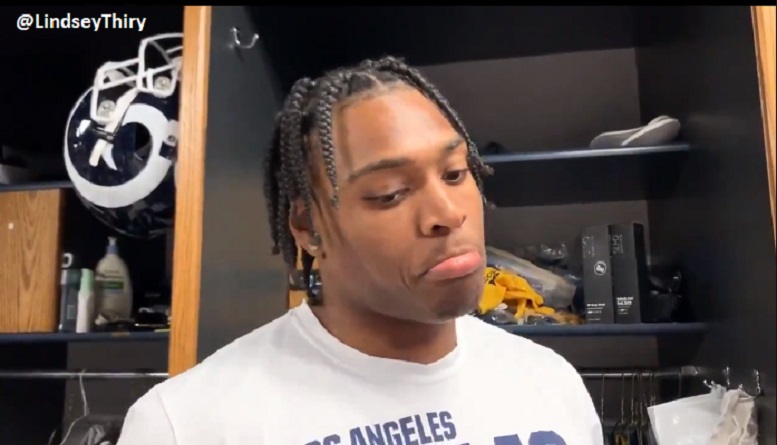 Los Angeles Rams cornerback Jalen Ramsey figures to see a lot of Pittsburgh Steelers wide receiver JuJu Smith-Schuster on Sunday at Heinz Field and it doesn’t sound like the former first-round draft pick of the Jacksonville Jaguars is too worried about how that matchup will go.

“No disrespect to him, he’s not Antonio Brown,” Ramsey said of Smith-Schuster on Friday. … “Now I’m going up against a different person, different body type, different receiver a little bit. He can make plays. But I’m going to play my game. Not really worried about it.”

“No disrespect to him, he’s not Antonio Brown,” Jalen Ramsey says about JuJu Smith-Schuster, who he’s expected to match up against Sunday. However, Ramsey says he likes Smith-Schuster’s style of play. “He plays very physical, he plays strong, aggressive through the catch.” pic.twitter.com/N9KIvovcKd

So far this season, Smith-Schuster certainly isn’t Antonio Brown-like as he has registered just 33 receptions for 459 yards and three touchdowns. Those stats aren’t as great as many thought they would be ahead of the start of the regular season. Obviously losing starting quarterback Ben Roethlisberger to a season-ending elbow injury in Week 2 didn’t help Smith-Schuster’s potential of duplicating the 111 catch season he had in 2018.

In last week’s Steelers win over the Indianapolis Colts, Smith-Schuster registered just three catches for 16 yards on five total targets. On Tuesday, Smith-Schuster didn’t seem to be too fazed by his lack of production in that game or his stats being lower than expected at the halfway point of the regular season.

“It’s the situation, scenario of our team,” Smith-Schuster said about him staying positive despite not having the kind of production he thought he might have at this point of the season. “Thank God we got a huge win and we have to just keep stacking them. On my perspective, not getting the ball, whatever we do, a wins a win and that’s what we need to get a championship.”

With Smith-Schuster now likely to see a lot of Ramsey on Sunday when the Steelers host the Rams, the third-year wide receiver was asked to comment on that quickly approaching matchup.

“Jalen Ramsey’s arguably one of the best corners in the league,” Smith-Schuster said. “To have the opportunity to go against him, it’s going to be great, it’s a blessing. Their secondary is one of the best secondaries we play throughout the season, so, yeah.”

So, what makes Ramsey such a good cornerback?

“His name is Jalen Ramsey, that’s why,” Smith-Schuster said.

The last time the Steelers played against Ramsey was last season when they played the Jacksonville Jaguars on the road. Smith-Schuster caught eight passes for 104 yards in that Steelers win with three of those catches and 37 receiving yards seemingly coming with Ramsey covering him.

Will young Steelers quarterback Mason Rudolph be able to get Smith-Schuster the football on Sunday against Ramsey and the Rams? It’s hard to say for sure but it doesn’t sound like Ramsey is too worried about how much or how little Smith-Schuster will be targeted on Sunday when he’s responsible for covering him.

“Like I said, I’m more so focusing on myself with this game, not really him,” Ramsey said on Friday.

Smith-Schuster probably won’t comment on what Ramsey said before Sunday’s game but the Steelers young wide receiver did sound like he was looking forward to facing off against Ramsey this weekend just the same.

“Last time going against him he really didn’t talk much, just kind of respected the game, you know, just played ball,” Smith-Schuster said this past week of Ramsey. “But like I said, he’s a great player and to have the opportunity to go against him sharpens my craft and his craft. So, it’ll be fun.”

Ramsey did, however, offer up some praise about the player he’s set to cover on Sunday.

“He plays very physical,” Ramsey said of Smith-Schuster. “He plays strong, aggressive through the catch.”