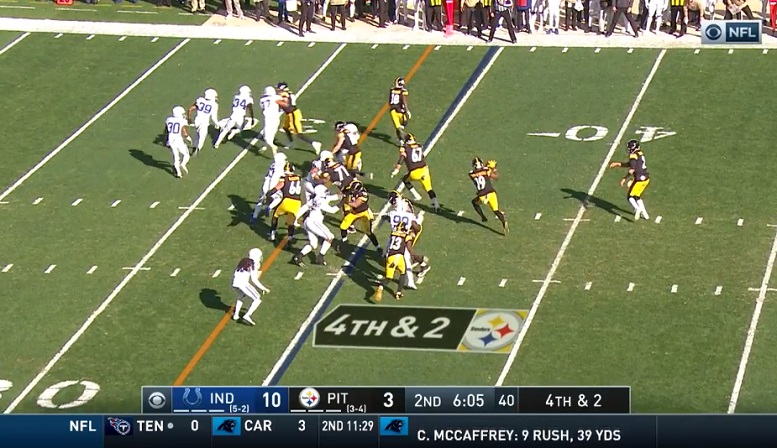 Trick plays, gadget plays were designed with one purpose – to catch the opponent off guard. When the Pittsburgh Steelers first brought out the shovel pass, it certainly did catch opponents off guard but a lot has changed since then. A play that was designed to be innovative and creative has now lost all its flavor.

The Steelers brought out the shovel pass again last week and it could not be more obvious that the play call is not fooling anyone, especially not Indianapolis Colts’ safety Malik Hooker.

The Steelers relied on the shovel pass on fourth and short against the Colts and it seems as if Hooker knew what was coming before Mason Rudolph could even receive the snap.

While it is impossible to guess what Hooker is telling his teammates, it is interesting that he points in the area of JuJu Smith-Schuster not once but twice before the ball is snapped. Could Hooker have been warning his team of a potential shovel pass? It’s certainly possible once you consider the fact that not only has the shovel pass been a frequent play call in short yardage situations but Smith-Schuster has been the recipient of these play calls more often than not.

Smith-Schuster is stopped short of the sticks which has happened quite often when the Steelers dial up their shovel pass. This happens for a few reasons on the play above, the first being that the play call is being overly abused and the second reason is that perhaps Rudolph hangs onto this ball for a split second too long. By the time Rudolph gets rid of the football, Matt Feiler is already losing leverage and Smith-Schuster is then tackled before the marker.

The unfortunate truth about this one specific gadget play is that it has become everything that a gadget play should not become – old, predictable and unsuccessful. Just a few weeks earlier, the Steelers ran a very similar play against the Baltimore Ravens and it also did not work out.

Almost the exact same play as the one run against the Colts except this play is flipped and Rudolph fakes a handoff to Diontae Johnson before pitching it to Smith-Schuster. Even with the minor differences, the Ravens are not fooled and blow this one up in the backfield for a loss of four.

Going back a bit further now, another shovel pass shows itself during a matchup against the Denver Broncos from last season. As one would predict, it is another short yardage situation, this one near the goal line and Smith-Schuster is set up inside.

This play ends up just like the others as Smith-Schuster is stopped short of the goal line. Von Miller sniffs this one out while the Broncos’ secondary crashes down before the Steelers’ receiver can get into the end zone.

It is not just Smith-Schuster who has failed either, as the Steelers have tried to spice it up by using a tight end, usually Vance McDonald instead. Despite the Steelers trying their best to disguise the play call, opponents have still been able to see through their trick.

Ben Roethlisberger does not even get the shovel pass off here because the Jacksonville Jaguars have it defended so well. A disastrous play from the start, Roethlisberger was luckily able to bail out his team and get into the end zone anyways.

A few years ago, the Steelers had been the talk of the town after debuting their new magic trick but now it has become an old and common trick. The Steelers may want to go back to the drawing board and add a new twist to their shovel pass. The NFL is a league built on innovation with a general rule of ‘adapt or die’ and right now the Steelers are beating their shovel pass play call like a dead horse.