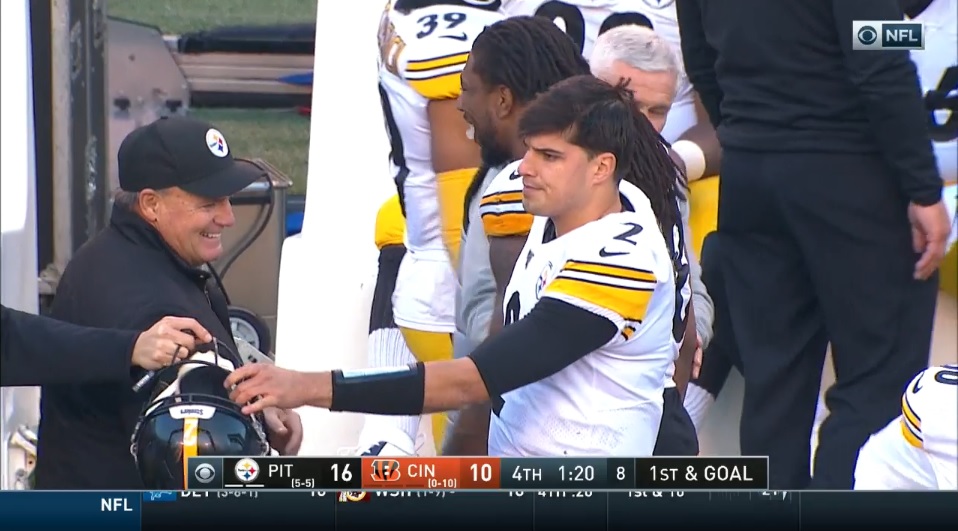 We had hoped Mason Rudolph would bounce back from the worst performance of the year, the four interception mess that was the Cleveland Browns game, and all the drama that’s followed it. That didn’t happen. Not by a longshot. Rudolph played just as poorly, arguably even worse, without the excuses of a team decimated by injuries or the pitfalls of playing on a short week.

One series into the third quarter, Rudolph was pulled, which was the right decision at the time and ultimately the right one based on result.

So what went wrong? I usually prefer to wait for the All-22 and make no mistake, can’t wait to check it out when it releases, but we have enough footage from the TV tape to recognize how bad things were. There were breakdowns in every area of quarterback play. Let’s take a look.

The first came on his interception after a long first quarter drive. To be fair, David DeCastro gets walked back a bit and Rudolph’s arm was clearly hit, leading to the pass floating. But it looks like this throw is going over the middle to Tevin Jones, blanketed by three defenders in the middle of the field. 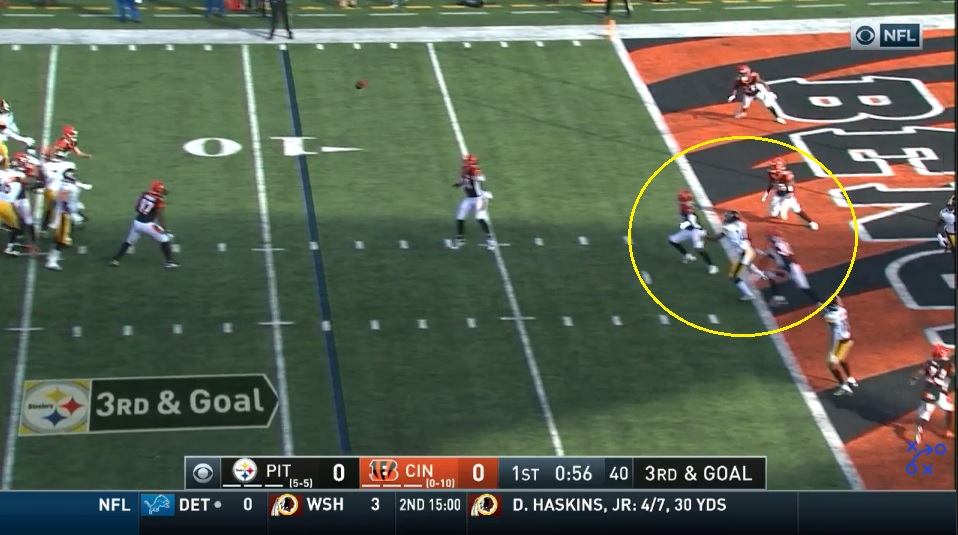 Maybe it isn’t. Maybe he’s looking for Diontae Johnson to the right or James Washington behind them but it’s a risky throw in a tight area where you have to know to just get points. Finally put together an extensive drive, it’s going to be a low-scoring game, can’t come away empty-handed. Red zone turnovers are a killer and drive a coaching staff – and fans – nuts.

Another missed chance in the red zone. Actually a really nice route by Tevin Jones to stem outside, get on the CBs toes, and burst inside down the seam. But Rudolph is late to fire it and throws behind, forcing Jones to turn back and play through the corner as opposed to putting the ball out in front and letting him make an uncontested catch.

Rudolph just has to be faster here. It’s his first progression, he watches it open up, but he has to hit his drop quicker and get the ball out at the top of it. Gotta be able to speed things up in the red zone, where windows tighten up faster than any other part of the field. Poor timing and definitely bad placement leads to a field goal.

You can see Rudolph at the bottom of the GIF.

Placement issue here. Rudolph is predictably gun shy standing in his own end zone after taking safeties two of the last three weeks. Good on him for getting the ball away and yes, he’s throwing off platform but this is a dangerously high throw with a couple defenders around Benny Snell. Credit to Snell for making a great leaping grab to secure this one, even if it resulted in a punt. Not a good way to start the game.

Rudolph’s last throw before getting pulled. 3rd and 13. Clean pocket, sees Diontae Johnson but his throw corkscrews into the ground. Why? Poor mechanics. I’m not a QB expert but watch his front leg/knee. Locks up as he tries to drive the throw. Aside from safety risks (a locked front knee is an obvious way to suffer an injury), it’s harder to be able to transfer weight and drive the throw. You’re stiffer, more upright, and you don’t get everything on the throw.

Check out Ben Roethlisberger’s front knee in this photo. Slight bend to it. What you want to see.

I asked QB expert Mark Schofield over at Pats Pulpit for the issues created when the QB’s front leg locks up. Here’s what we wrote:

“So when a passer locks up their front leg, it can have a negative impact on both ball velocity and ball placement. In terms of velocity, it almost acts like a brake of sorts, stopping the lower body momentum into the throw and creating a break in the chain between upper and lower body. That creates a situation where the passer’s lower body is working against himself. In terms of accuracy, it messes with the release point and often creates throws that are either too high or too low.”

As a result, you get poor velocity and placement that results in another punt before Devlin Hodges takes over. Even if he showed proper mechanics on that play, it’s getting thrown into a host of traffic. Little hard to tell from the TV view but looks like a hospital ball.

This doesn’t include three or four other players worthy of adding to this list. Almost nothing went right for him Sunday. Even some of the completions he did have looked shaky. It adds mounting concerns to an already uncertain future and place in this league.

It’s no longer a question of if he’ll get better going forward. It’s a matter of if he’ll be given that chance. Or if the team will roll with Hodges for their playoff push. I would choose the latter.