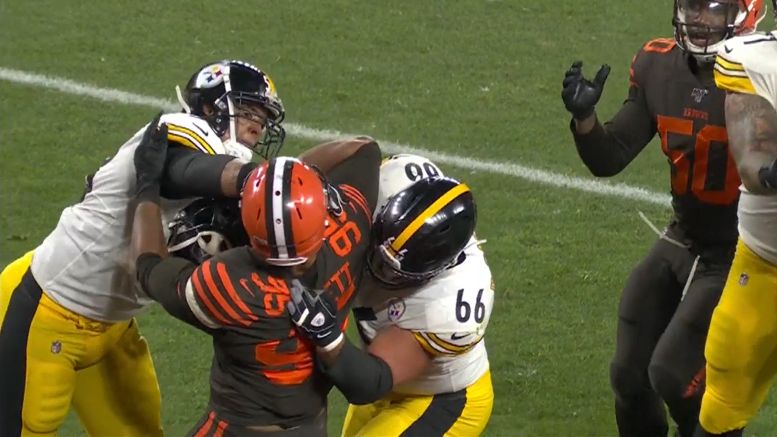 As you have probably heard at some point, because it’s been known since before Sunday’s game, Pittsburgh Steelers right guard David DeCastro was fined for his role in the altercation primarily between Mason Rudolph and Myles Garrett during the game against the Cleveland Browns that took place two weeks ago today.

In his first media availability during the work week since being fined, he talked about the decision, but he wasn’t too happy about it. “I can’t wait to hear the explanation for trying to break up a fight”, Brook Taylor of ESPN quoted him as saying.

What’s especially fascinating about the league’s decision to fine him is the fact that Garrett himself praised DeCastro for the role that he played in that aftermath. “Even DeCastro on the other team, he was trying to keep everybody off of me”, he said, via Jake Trotter. “He understood the gravity of the situation, and he didn’t want any more blows to be thrown, and he knew it was just two guys getting chippy. He and I made a mistake, but I appreciate him coming up to me…and having my back in the whole situation”.

And so…he’s going to be fined for doing what the guy that he did it to was appreciative of, I guess? “I guess it’s some dumb rule in the NFL where you can’t be a peacemaker”, DeCastro mused.

He was one of basically dozens of Steelers fined, but his was more significant than most for being directly involved, while many were fined for clearing the bench and advancing toward a fight Ramon Foster got one of those letters. “It basically says, ‘you can’t contest it’”, he told Taylor. “Which is pretty insane to me. I was on the field around it. I didn’t even do anything. Really didn’t do anything”.

“The letter basically says you can’t walk toward a fight”, he went on. “Being a peacemaker is no excuse”. In other words, it doesn’t sound as though there is much of any hope of a successful appeal. DeCastro suggested that he may ultimately decide to appeal the fine, even though he had no expectations of having it reversed.

Perhaps if only, as he said, to hear their explanation for why a player whose efforts to de-escalate an altercation were at least partially successful—even if a violent blow to the head was struck while he was attempting to restrain one of the two primary agents.

I do understand, however, that the league felt it was necessary for them to come down hard in this instance, and the sheer optics of that long list of fines was part of that. And if we’re being honest, these fines are chump change for many of the players involved, especially DeCastro, who is among the highest-paid interior offensive linemen in the league.