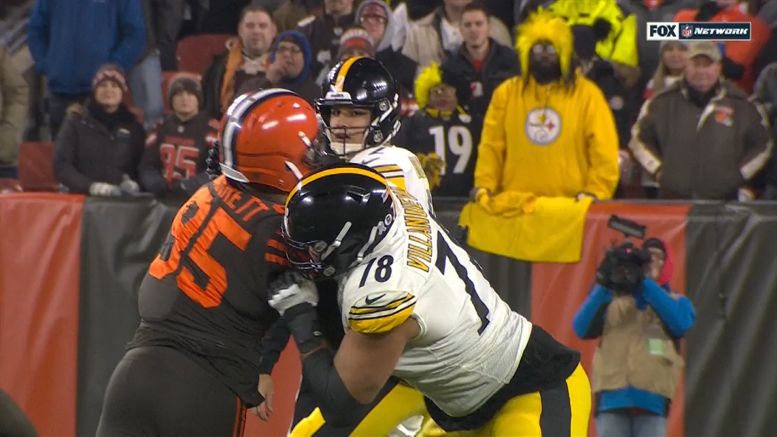 It’s hard to even write about last night’s game without focusing on the final 14 seconds right now. I’m sure I’m not the only one who still feels somewhat of a sense of shock about what they saw. And one of the many shames about all this is that Myles Garrett was already playing a great game before he decided to display the sort of disgusting behavior he has shown he is capable of, assaulting Mason Rudolph by striking him in the head with the quarterback’s own helmet, which he ripped off his head.

Considering the fact that he only registered one tackle during the game, however, Garrett had a very impactful performance for a Browns defense that was clearly too much for a Steelers offense that became increasingly undermanned as the game progressed.

And the 2017 first-overall pick really had his way for Alejandro Villanueva, who turned in his second straight ugly performance in a row. After being flagged for two holding calls on Sunday, Garrett caused him to draw two more last night, so that’s four within a span of days.

It’s true that Villanueva is being tasked with going up against some legitimately elite players right now with the likes of Garrett, and Aaron Donald in the game before. But let’s just be clear. Rudolph and the Steelers need their left tackle to do a better job of protecting their quarterback than he has been over this recent stretch.

That’s not entirely on him, but it doesn’t matter. Rudolph has clearly shown that, right now in his development, he is a quarterback who needs time. He is methodical in his reads, which he is still learning how to process, and he needs that time in the pocket to go through his progressions.

When his progressions are accelerated, he is liable to settle for an unsuccessful play via checkdown, or hold on to the ball too long and take a hit. Sometimes that leads to making a play, but more often than not, it just gets him a hit he didn’t need to take, frequently accompanied by an off-target pass as he gets hit while in his throwing motion.