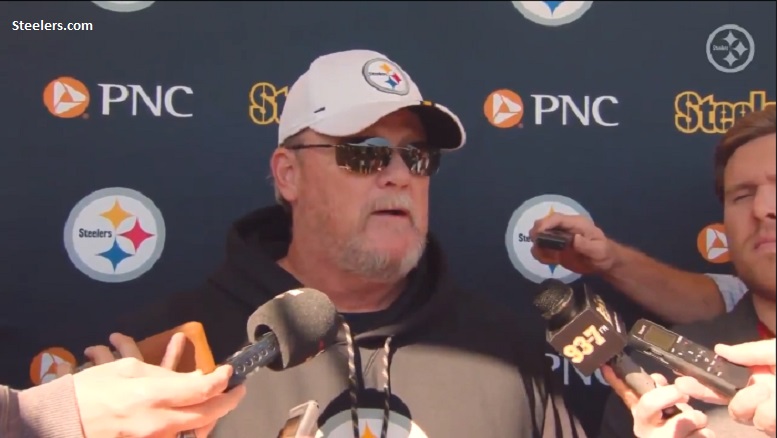 The Pittsburgh Steelers will enter their week 8 Monday night home game against the Miami Dolphins near the bottom of the league when it comes to offensive explosive plays of 20 yards or more and that’s not something we’re accustomed seeing. On Thursday, Steelers offensive coordinator Randy Fichtner was asked if he needs more explosion in the pass game and if so, if that’s close to becoming a reality.

“I mean, they’ve come, they just hadn’t come consistently enough,” Fichtner said. “I don’t know that it’s by design, you know, you just gotta take advantage of the opportunity when it presents itself. And I think we’ve got guys that can make plays down the yard.”

To date, the Steelers offense has registered only 18 explosive plays of 20 yards or more through six games played and only four other teams enter Week 8 with fewer with the Dolphins being one of them. One of those 18 plays came via a scramble by quarterback Devlin Hodges and while it counts, it really shouldn’t.

Fichtner also made it clear on Thursday that while dinking and dunking the football down the field and without explosive plays on a consistent basis would be a nice thing to accomplish, he knows it’s just not that realistic.

“Well, it makes you go the long, hard way, you know, and you’d like to say if you want to be proud of something, then I would say I’d be very proud if you can consistently take 10, 12 play drives and score,” Fichtner said. “That’s just awful hard to do. Defenses get paid well and they get coached well. And that just doesn’t always happen.”

Seven other explosive plays were registered by Steelers running backs with three of those being runs and the other four short passes. Steelers wide receivers JuJu Smith-Schuster (4), James Washington (3) and Diontae Johnson (2) have combined to produce nine explosive plays via receptions with four of those resulting in touchdowns. On Thursday, Fichtner talked about those three wide receivers potentially registering more explosive plays moving forward.

“I’m always hunting ways to get the ball in JuJu’s hand,” Fichtner said. “You see young 18 [Diontae Johnson] coming on. You see James [Washington] is coming back to us this week. It’s exciting. So, I look forward to that.”

Steelers quarterback Mason Rudolph, who has had eight of his caught passes so far this season result in explosive plays, also was asked on Thursday about the potential need for the offense to start pushing the football down the field more in an effort to get more chunk plays of 20 yards or more.

“You gotta have balance,” Rudolph said. “Any offense, there’s going to be days where there’s chances, opportunities to push the ball down the field. And then there’s opportunities where you have to really take what the defense gives you. That’s been a point of emphasis for us. We have a lot of guys that can go deep and can make those plays for us. They’ve made those plays for us in practice the last couple weeks and we feel really comfortable about where we are moving forward in that area. You’re going to see a lot more explosion and guys stretching the field.”

The Steelers offense will face a Dolphins defense Monday night that has already allowed 30 explosive this season with seven resulting in touchdowns. That same Miami defense has also given up plenty of deep pass completions in which the football has traveled more than 15 yards in the air past the line of scrimmage. In short, it will be very disappointing if the Steelers offense doesn’t register at least five explosive plays Monday night against the Dolphins with two or three of those coming via deep pass attempts.