The Pittsburgh Steelers defense has played well through the first six games of the 2019 regular season. It might not have felt like it at times, but the pass defense stats certainly show that to be the case and especially the adjusted net yards per passing attempt stats.

If you have read my work on this site for a while you already know how big of fan I am of ANY/A (adjusted net yards per passing attempt) stat. Is a great stat to measure the quality of offensive and defensive passing games and especially from Week 6 or 7 of the regular season and on.

For those of you who are new to ANY/A, here is the math related to the stat: ANY/A=(pass yards + 20*(pass TD) – 45*(interceptions thrown) – sack yards)/(passing attempts + sacks). It can be used for both offensive and defensive passing stats.

Let it be known that the 3.75 ANY/A stat posted by the 2017 Steelers defense in the first six games came against quite a few opposing offenses that weren’t great. That year’s defense got exposed some during the second half of that regular season and ended the year with a defensive ANY/A stat of 5.20. That was the year the Steelers lost inside linebacker Ryan Shazier to a serious spinal injury and while that 2017 Steelers team ultimately made the playoffs, they lost in the Divisional Round to the Jacksonville Jaguars.

The Steelers 2019 defense has already been heavily tested so far through the first six games of the regular season. Sure, the Steelers defense chewed up a very dismal Cincinnati Bengals offense, but that unit has already faced a few of the better offenses in the NFL so far this season in the Patriots, Seattle Seahawks and San Francisco 49ers. The offense of the Los Angeles Chargers that the Steelers faced this past Sunday night also isn’t awful.

Should the Steelers 2019 pass defense be expected to lower that ANY/A stat moving forward past their bye week? Absolute. Additionally, let the record show that the combined ANY/A of the six offenses the Steelers defense has already faced this season against the other teams those teams have played is 7.19. In summation, that shows that the defense has faced some collectively good offenses.

Eight of the Steelers final 10 opponents remaining on their 2019 regular season schedule currently have offensive ANY/A stats under 6.00 and that’s an encouraging thought. In short, the Steelers defense should be expected to hold up their side of things in the final 10 games of 2019 and thus if the offense can start playing better there’s still reason to be optimistic that this team that started 1-4 can ultimately make the playoffs.

Below are the offensive and defensive ANY/A stats for all 32 teams through Week 6 of the 2019 NFL regular season and they are sorted by the differential. The higher the positive number the better and teams that hope to make the playoffs after six weeks better have a differential of no worse than -1.0. Th Steelers have .20 differential through six games played and while not great, there’s reasons to believe that number will begin increasing through their next six games.

We’ll reexamine these ANY/A stats after the Steelers next two games to see if there’s an increased amount of optimism that this year’s team can ultimately make the playoffs. 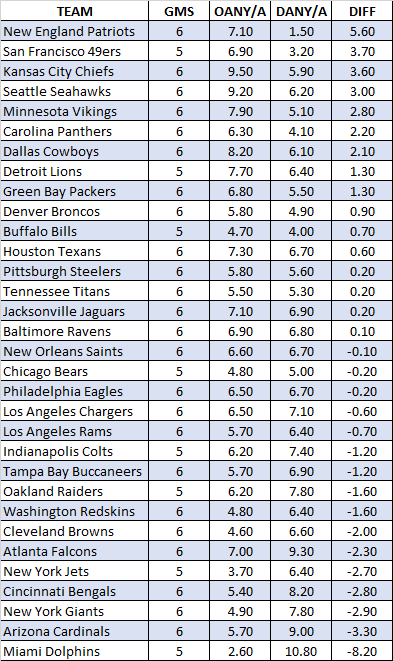