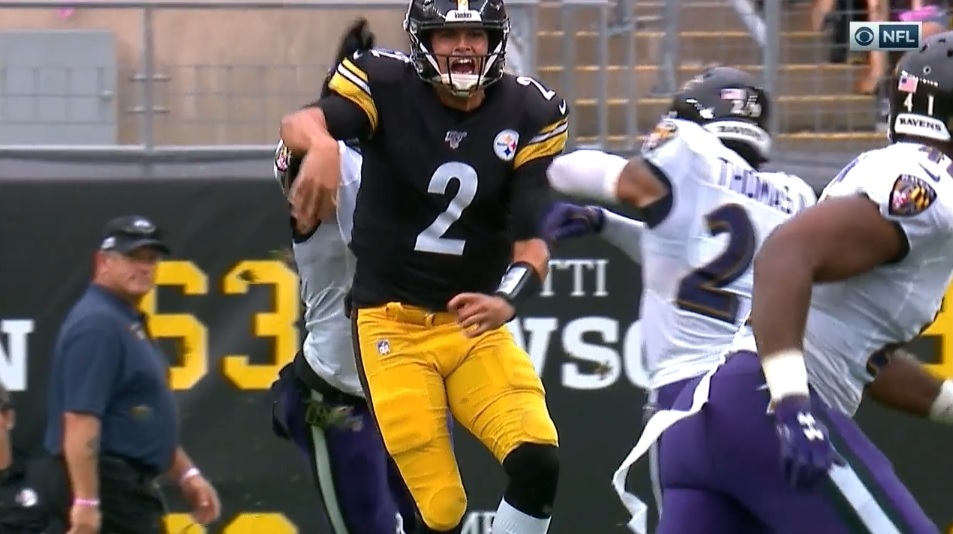 Undoubtedly one of the very ugliest moments of the 2019 season so far for the Pittsburgh Steelers was the scary hit that second-year quarterback Mason Rudolph took during the second half of their loss to the Baltimore Ravens on Sunday.

While scrambling to his left looking for an outlet to complete a third-down pass, Rudolph, making his third career start, took a direct hit to the head from Ravens safety Earl Thomas that saw him lose consciousness well before he hit the ground. He hit his head hard on the playing surface again as a result, and remained in that state for some time.

He did ultimately regain consciousness and communicativeness, choosing to walk off the field rather than being carted off, with assistance at different times from medical staff and teammates. It was ultimately inactive linemen Chukwuma Okorafor and Fred Banner who helped him up the tunnel, where he would later be transported to a local hospital for further evaluation.

But everything since then has been positive on that front. We learned that he was able to return home later that day and sleep in his own bed. He made an appearance at the Steelers’ facility on Monday, much to the delight of his teammates. And head coach Mike Tomlin reflected that awareness in his comments yesterday during his pre-game press conference.

“Mason Rudolph is in the concussion protocol. He was in the building yesterday. He appears to be doing fine, just in terms of communicating with him”, he said of his young starting quarterback, in that role following a season-ending injury to Ben Roethlisberger.

“Obviously I won’t have a lot of detail in terms of where he is in the protocol or speculation what that is and the timetable of it, because I’ve been at this long enough to know that I’m not a medical expert”, he warned. “We’ve got a great deal of confidence in our medical experts and the independent neuro people that are involved in his process, and they’ll do their due diligence, and when he’s available to us, he’s available to us”.

But just from interacting with him and seeing him—it’s good to see him, obviously—he appears to be doing fine”, Tomlin added, “and has expressed that, and that’s really all I have in terms of intimate details regarding him or his status or what the week could potentially look like. I just don’t want to get into the speculation; that could be endless”.

While the hit that he took looked ugly—both from Thomas and from the ground, frankly—appearances don’t necessarily always correlate to the ‘severity’ of a concussion in terms of a recovery timeline, which largely depends upon the individual.

While it’s highly unlikely that he will have the opportunity to start this week, simply due to practice time missed, it’s not, at least as of now, impossible for him to clear the concussion protocol and be able to suit up as an emergency backup, which would prevent the Steelers from the need to promote Paxton Lynch from the practice squad.