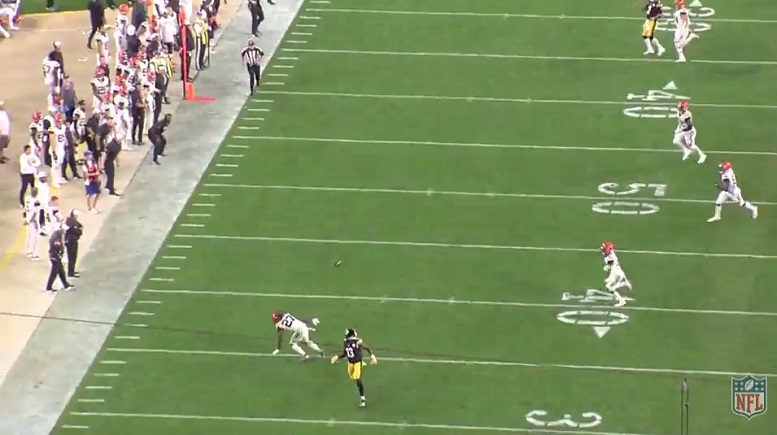 When the two played together for three seasons at Oklahoma State, Pittsburgh Steelers quarterback Mason Rudolph and wide receiver James Washington were quite the duo as the two players connected on passes quite regularly during games. That said, Rudolph has only managed to connect three times with Washington for 25 yards in the 10 quarters he’s played since taking over for injured quarterback Ben Roethlisberger.

Given his history with Washington, Rudolph was asked on Thursday if he’s surprised he hasn’t hooked up more with him more than he has in the 10 total quarters that he’s played so far this season.

“No, I think it’s been two games,” Rudolph said. “I think, you know, it’s just kinda happened that way. Like I said, different people step up. Last game it was our running backs that did a great job of advancing the ball. That was kind of a match we wanted to get. We wanted to get our running backs on their linebackers because we felt like that was a favorable match up for us and so that was kind of a point of emphasis. So, but no, James will get it. He’s had a great week of practice and it’s just a matter of time before you get the right look and then you get connected.”

Steelers offensive coordinator Randy Fichtner was also asked on Thursday if he’s surprised by the lack of connections between Rudolph and Washington so far this season.

“No, no particular reason, and not surprised,” Fichtner said. “When it comes, it comes. And they have hooked up, just haven’t hooked up as much as we’d like them to.”

So, is Washington getting open?

By the way the both the tape and the analytics say Fichtner is right.

While Rudolph and Washington did connect too many times to count when they played together at Oklahoma State, most of those completed passes happened more than 10 yards down the field. So far in his first 10 quarters of play with the Steelers, Rudolph’s pass attempts that have flown 10 or more yards past the line of scrimmage have been few and far between.

The Steelers will host the Baltimore Ravens on Sunday art Heinz Field and that game will mark Rudolph’s third career start. The Ravens defense has given up quite a few deep pass receptions entering Week 5 and because of that, Fichtner was asked Thursday if Rudolph is capable of taking advantage of that.

“I believe so,” Fichtner said. “I mean we’ve made some big plays. We’d like to make more. We’re hunting more all the time, but it all comes down to really a together group effort. You know it starts with protection, by running backs, by a quarterback, starting receiver and our offensive line. It starts with receivers getting open, tight ends getting open, running backs getting open. So, there’s a lot that goes in to throwing the ball, but there’s a lot of good opportunities there too.”

The Ravens aren’t likely have starting cornerback Jimmy Smith on Sunday so cornerback Brandon Carr will more than likely start again in his place. Washington versus Carr is a matchup that should favor Washington so we could see Rudolph throw deeper down the field to his former college teammate a few times on Sunday.