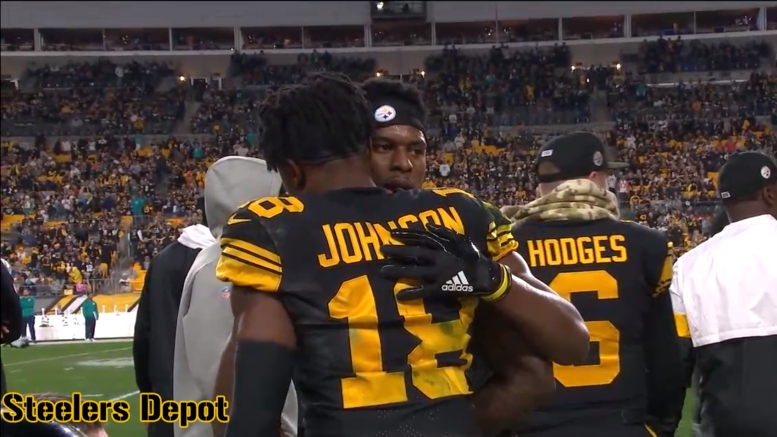 For the first time in any game this season, the Pittsburgh Steelers had multiple players record 80 yards on receptions or more. It was also the first time that a pair of wide receivers had recorded 60 yards or more in a single game since the start of the 2019 season.

Third-year wide receiver JuJu Smith-Schuster recorded his first 100-yard game of the season after having eight such contests in 2018 en route to a Pro Bowl. Rookie Diontae Johnson, a third-round selection who is becoming increasingly more integral to what the Steelers are doing on offense, set a new career-high with his 84 yards on the day against the Miami Dolphins on Monday night.

It was also only the second time that they had multiple touchdowns from the wide receiver position in the same game since the beginning of the year, with Smith-Schuster and Johnson having also done it once before in the game against the San Francisco 49ers.

The pair combined for 10 receptions for 187 yards and two scores, which is comfortably the best combined lined for a wide receiver duo for the Steelers this season. It’s no coincidence that it also happened to be the most aggressive showing yet from Mason Rudolph, but more importantly, it speaks to what is to come in the future for this offense.

While he may believe that the rest of the room is dominant as well, it’s clear that he and Johnson are and will be the two who will receive the lion’s share of attention. James Washington continues to be involved—he had only one fewer target than Washington—but until his catch percentage drastically improves, he will be reserved as the third priority.

And if he pushes his way into the conversation, that is certainly a good problem to have. There is no such thing as having too many good wide receivers as long as it is a room that is capable of working in harmony—which may not have been the case in years past.

This young group is still very much undefined, but we have at least the next season and a half—probably two and a half seasons or more—to get a feel for what these wide receivers will become. As long as Johnson can stop fumbling and slipping out of his breaks, though, he looks to be a good one.