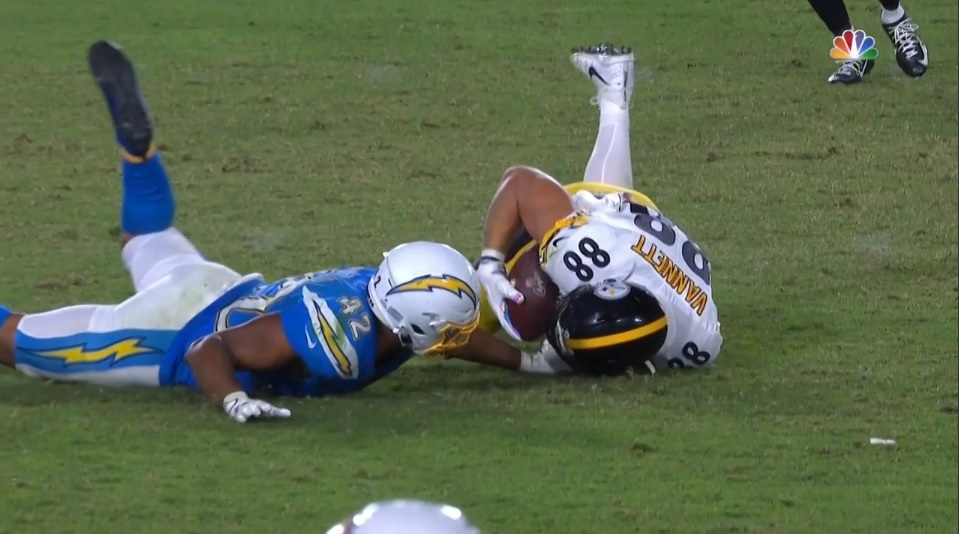 James Daniel isn’t one to offer much of a compliment. Honestly, he isn’t one to say much of anything. So while the tight ends coach offered only a brief evaluation of TE Nick Vannett, it was positive, and that’s worth noting.

“Nick’s come in for the short amount of time he’s been there, I think he’s been effective and done a good job for us,” Daniel told reporters earlier in the week via the team website.

Like Seattle, Vannett hasn’t had a big impact on the passing game. In his three games as a Steeler, he’s notched only three receptions for 33 yards. Those are even lower than his numbers as a Seahawk (4 catches, 38 yards before getting dealt). But his value goes beyond the box score. He’s worked well in scramble drills and made tough catches over the middle. His five yard grab versus Los Angeles looks a lot more impressive on tape than in the stat sheet.

He’s also proven to be an effective blocker in the run and pass game. Steelers’ tight ends have to do more of the dirty work than most other teams, making it hard to find college players – like 5th round pick Zach Gentry – able to do the job right away. Vannett offers that to the team.

Tight end has been a position in flux from basically the beginning. Vance McDonald has been playing through a sprained shoulder. Xavier Grimble came and went and proved he wasn’t a #2 tight end in the NFL while Gentry has struggled to even get a hat on gameday. But Daniel doesn’t view any of those issues as excuses for the overall performance of the group.

“That’s just part of the game,” he said. “All it is is getting guys in, trying to get them indoctrinated into the system, and making sure they understand things. We’ve had some turnover but we’ve had some guys come in and really be eager about learning and trying to help the program. They’ve done a good job of that.”

In addition to those three on the main roster, TE Kevin Rader and Christian Scotland-Williamson are on the practice squad. CSW remains on the team as part of the NFL’s International Pathway Program, making him ineligible to be promoted to the active roster this season.

Tight end figures to be a position the team could look at next year especially if Vannett isn’t re-signed. He’s entering the final year of his rookie deal.