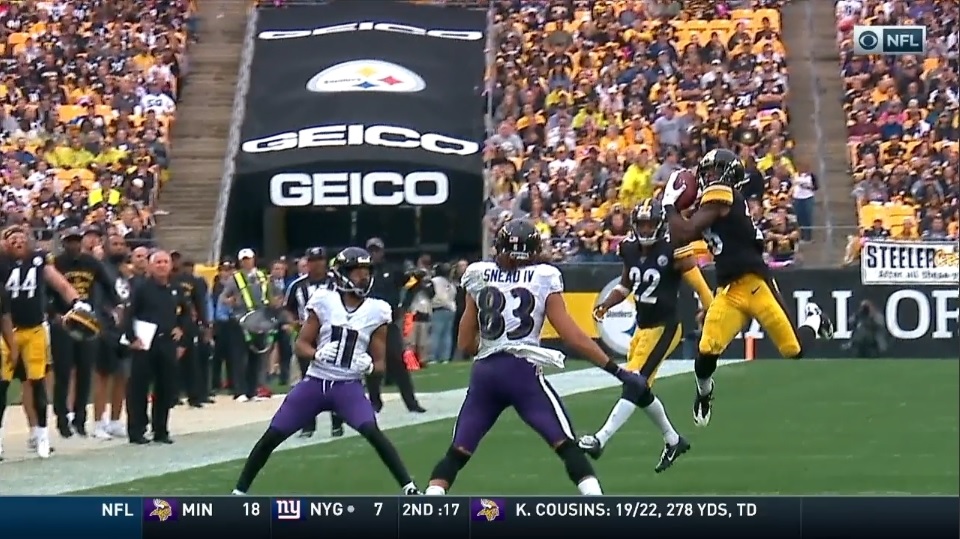 Win as a team, lose as a team. An admirable mantra. While the Pittsburgh Steelers’ defense surely wishes it had some plays back today, they’re clearly the strength of this team. And the catalyst for why all these losses have been close. They continued that streak Sunday afternoon, creating three turnovers against a talented Baltimore Ravens’ offense. Let’s take a look.

A play finished by Kelly but created by Minkah Fitzpatrick, whose play has made it a lot easier to deal with the Steelers trading next year’s 1st round pick for him.

Pittsburgh finally decided to cover TE Mark Andrews on 3rd down, a good enough start compared to what happened in the first quarter, and created a plus, or at least even, matchup by getting Fitz on him. Great job by Fitzpatrick to play the catch point, deflect the ball, allowing Kelly to come down with it.

Just a great play by Hilton here. Hook defender in zone coverage. Able to get eyes on the ball, sink, and make the grab before going out of bounds. Not the hardest play in the world, sure, but one that’s probably dropped by this team last year.

And the hardest pick of the three. Devin Bush redeems himself from going offsides on 4th down a few plays earlier, allowing Baltimore to extend the drive. Covering Nick Boyle down the seam. Andrews loses control as he begins to go the ground and Bush is able to swipe through his hands, knocking the ball out and into Bush’s chest.

Some controversy if this was a catch or if the ground aided him but for my money, this is a clean catch. And why the Steelers traded up to #10 to get a guy to make plays like these.

Sunday’s performance gives Pittsburgh 12 takeaways this season, nearly matching the 15 they put up all of 2018.

The larger problem is what the Steelers’ offense has done with those turnovers. Over the last three weeks, they have just 25 points off 10 turnovers. Only once have they found the end zone. Here’s the game-by-game breakdown since Week 3:

For as opportunistic as this defense has been, the offense has been the opposite. If that story was a little different, we’d be painting a much rosier picture of the season.