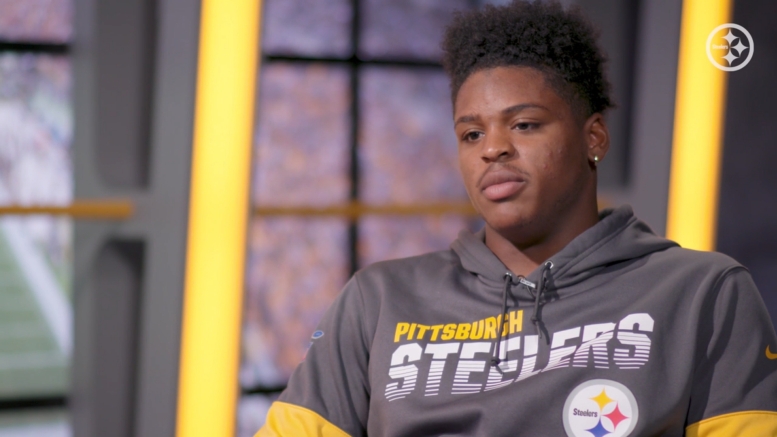 Devin Bush has 52 tackle through the first six games of his career. He is on pace for roughly 139 tackles, which would put him among the most tackles in a single season in franchise history for the Pittsburgh Steelers. That’s not a bad start for the rookie first-round draft pick.

Missi Matthews asked Bush about what it means to him to be the only rookie in the top 10 in tackles during a sit-down interview for the team’s website. “It’s motivation to stay in the top 10 and keep climbing my way up there as the season goes”, he said.

That answer is indicative of everything he’s said about anything relating to achievements so far through his young career, and probably sums up pretty well who he is as a person. Everything that he is able to accomplish is simply an additional drive to spur him on to bigger things, and to stay where he is if he’s already at the ceiling.

He gave a similar message when talking about winning the Defensive Player of the Week Award for his seven-tackle, one-interception, one-fumble-recovery, one-touchdown performance prior to the bye week in the Steelers’ victory over the Los Angeles Chargers.

He says the same things when anything is hinted about him winning the Defensive Rookie of the Year Award, or making the Pro Bowl, or really anything else. He says that he doesn’t pay much attention to those things. They will come if you simply do your job. The priority is winning games, and the best way to do that is to play as well as you can.

Bush is at the outset of his career. Everything that he achieves this early on, he takes as an appetizer of what he has in store for himself in the future. Every accomplishment is proof positive that he is on the right track, that he can go out there and play the way he expects to and reach his goals in the professional realm, at the highest level.

So what’s next for him? He’s checked a lot of boxes for ‘firsts’ already. He’s gotten his first sack, his first interception, his first touchdown. He’s still looking for his first forced fumble—he never had any in college, either, interestingly enough—so perhaps that is next on the agenda.