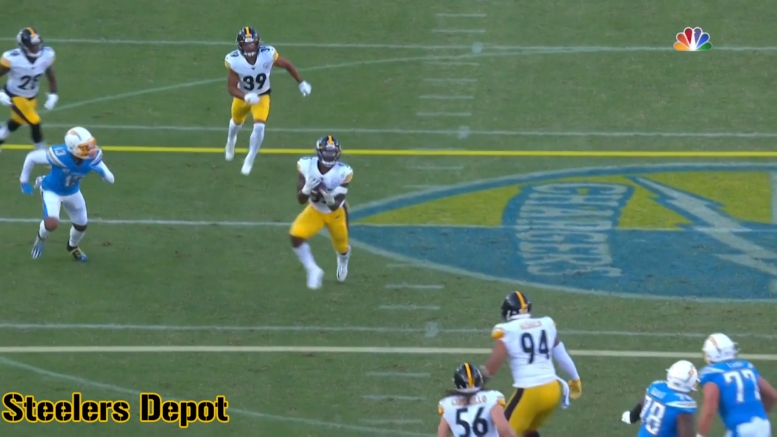 The Pittsburgh Steelers made arguably their most aggressive trade in franchise history, or at least in the modern era, giving up their first-round pick, as well as their second, and their third-round pick in 2020, in exchange for the Denver Broncos’ first. In effect, they moved up 10 spots in the first round, from 20 to 10, at the cost of second- and third-round picks.

They did that because it would allow them to select Michigan linebacker Devin Bush, a player they identified as a rare talent. Through the first six games of his career, he is certainly showing the signs of being just that, not just because he entered the night’s game leading all rookies in tackles.

Perhaps the biggest surprise about his rookie season so far is that he has been a magnet for the ball. While he has phenomenal physical and mental traits, with great instincts, one thing he did not do at the college level is produce turnovers. He had just one interception and zero forced fumbles during his three years at Michigan, even if he had 11 passes defensed and 10 sacks during that time.

Apparently, that won’t be a problem as he translates his skills from the college game to the pros. Through his sixth professional game, Bush already has six takeaways, including four recovered fumbles and two interceptions. He has consistently shown open-field awareness whenever a loose ball is around, and that has been very impactful for the defense.

Bush added one from each column against the Los Angeles Chargers, starting with the fumble. This came off of an incomplete pass that went backwards. While a few defenders were in the area, Bush had the presence of mind to carefully approach the ball, making sure he could secure it before scooping it up, and managed to take it in for the score. It was the Steelers’ 13th takeaway and first defensive touchdown on the season.

One theme the defense has been keeping this year has been better awareness of the ball, as they’ve gotten several interceptions off of deflections. Bush got one on the next play, off a pass batted at the line of scrimmage by Tyson Alualu.

He recorded his first career interception last week, off a deep pass from Lamar Jackson that was a bit long for Mark Andrews. Andrews couldn’t hang on, and Bush, in close coverage, was able to take it from him.

The week before that, he recovered not one, but two fumbles, and had another fumble recovery the week before that. That’s six takeaways in the past five weeks. I’m not sure the last time a Steelers player has done that.

Bush’s second half wasn’t nearly as compelling, and in fact he may have missed more tackles that he made, coming back from a minor ankle injury, but he has a week off now to rest. There probably shouldn’t be anything to worry about.