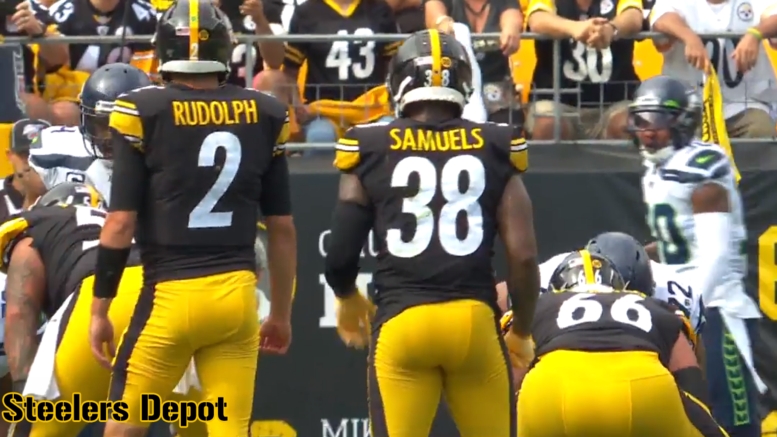 Less than a month after having his knee scoped following a knee injury that he suffered in Week Five against the Baltimore Ravens, second-year running back Jaylen Samuels was back on the practice field yesterday, evidently practicing in a fully capacity.

That’s a pretty accelerated timeline, all things considered, if he is able to get back out on the field in time for the Steelers’ Monday night game against the Miami Dolphins this week. He was expected to be out for about a month, which is what head coach Mike Tomlin announced on the Tuesday after that game.

If he only ends up missing just one game, that would be impressive, but we’ll have to see how he feels today. If he can put together another full day of practice today, that will be a great sign about his availability for the offense at Heinz Field in primetime.

Through the first five games, Samuels recorded 50 yards on the ground and 83 yards through the air, with one rushing touchdown, which was the first of his career (he had three receiving touchdowns as a rookie).

He is capable of playing a much bigger role, and remember, he was also playing in the Wildcat, even if it resulted in a disastrous interception against the Ravens. But I don’t think they’ll abandon it altogether just because of that one play when it was elsewhere effective.

It’s not like Ben Roethlisberger is coming back this year, after all.

While Benny Snell ran promisingly well against the Los Angeles Chargers in the team’s next game, they would surely be much more comfortable if they also had Samuels as an option behind James Conner. The more hands on deck, the better.

But just the fact that he is even putting himself in the conversation of being available for the next game is significant. Even if he ultimately doesn’t play, it means that he’s close, and should be back the next week.