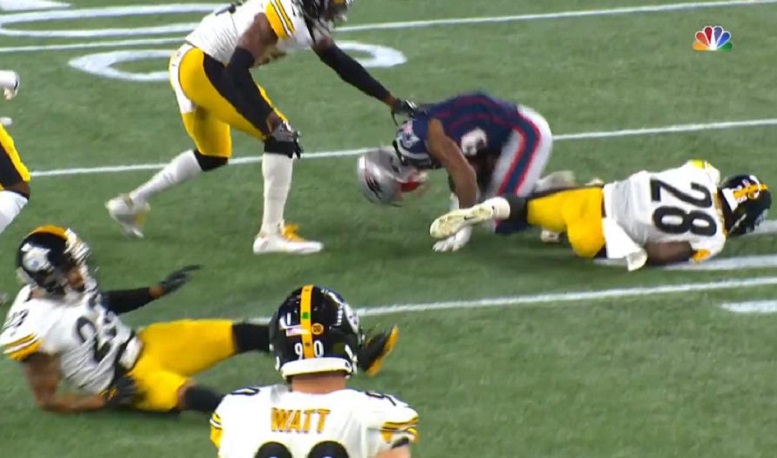 Pittsburgh Steelers outside linebacker T.J. Watt was the defensive quarterback Sunday night in the team’s Week 1 road loss to the New England Patriots and him handling that role was a little bit of a surprise. During a Thursday session with the media, Watt was asked how he thinks it went Sunday night with him wearing the communication helmet with the green dot on it.

“I think it went well,” Watt said “I mean it’s definitely a little bit different for me having all the communication, but it’s a lot of guys out there that relay all the plays anyways. So, it’s just trying to get the signals as soon as you can and try to relay the message, but I feel like it went well.”

Is wearing the communication helmet something that Watt has done before?

“No, I think I did it in Tennessee actually for the few plays I was out there, but that was the first real test,” Watt said Thursday. “But we signal in stuff too, so I mean it’s not always just me getting the call. Just try to relay it as quickly as possible when I do though.”

Did Watt face any challenges when it came to him being the quarterback of the Steelers defense Sunday night and thus being the one responsible for relaying the play call?

The Steelers defense obviously didn’t play well Sunday night against the Patriots offense as quarterback Tom Brady pretty much had his way with the unit throughout the entire game. The Steelers had their all-too-familiar communication issues Sunday night against the Patriots and a few blown coverages and missed assignments resulted in a few big plays and a couple of scores.

A few of those scores the Patriots Sunday night at Gillette Stadium happened when Watt wasn’t on the field and he also left the game for good in the fourth quarter with a hip injury. When he was out of the game, it didn’t appear as though the Steelers defense had a player that took over the communication helmet. On Thursday, he was asked if he knows if a different player wore the communication helmet with the green dot on it when he was out of the game.

After watching the tape from the Patriots game, Watt let it be known on Thursday what areas he believes the Steelers defense needs to improve in starting Sunday at Heinz Field against the Seattle Seahawks.

“I think just everyone being on the same page,” Watt said. “I think being at home in our own environment and just trying to simplify things a little bit just so we’re not all on different pages and just try to play as fast and as smart as we know we can. We know we’re a quick defense. We know we can play fast and at an elite level, it’s just a matter of all being on the same page and all knowing what everyone’s got.”

Watt’s hip injury that he suffered Sunday night against the Patriots doesn’t sound like it’s serious in nature and after practicing on a limited basis Wednesday, he updated his condition on Thursday and gave all indications that he’ll play this coming Sunday against the Seahawks.

“I feel good, I feel real good,” Watt said. “I’m excited about this week, excited to get in Heinz field and in front of everybody and Steeler Nation and go out there and put up a much better effort this week.”

It will now be interesting to see if Watt once again wears the communication helmet Sunday against the Seahawks. The Steelers obviously would like rookie inside linebacker Devin Bush to become the defensive quarterback sooner rather than later, but he might not be ready just yet for that kind of promotion. Against the Patriots, Bush, who registered a team-best 11 total tackles, played 53 of the 70 total Steelers defensive snaps.