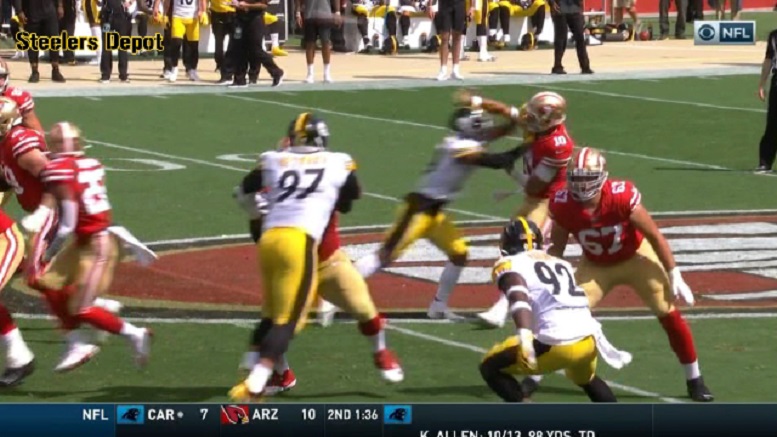 It’s not huge news, but I thought a few of you might like to know that Pittsburgh Steelers safety Minkah Fitzpatrick wasn’t fined this week for the roughing the passer penalty he was charged with in the team’s Week 3 Sunday road loss to the San Francisco 49ers, according to Matt Maiocco of NBC Sports Bay Area.

The roughing the passer penalty that Fitzpatrick was charged with on Sunday happened with 12:29 left in the second quarter and on a first and 10 play from the Steelers 40-yard-line. that play included Fitzpatrick blitzing free off the left side of the Steelers defense. Fitzpatrick was a little late getting to 49ers quarterback Jimmy Garoppolo on that rush as the ball was passed quickly to the middle of the field to wide receiver Marquise Goodwin for a gain of 16 yards.

After the penalty yardage was assessed on top of the reception yardage, the 49ers had the ball at the Steelers 12-yard-line. Fortunately for the Steelers, however, the 49ers fumbled away the football at the Pittsburgh 7-yard-line just a few plays later.

In related news, 49ers tackle Justin Skule, who made his first career start Sunday against the Steelers, reportedly wasn’t fined for his fourth quarter blindside block on defensive end Cameron Heyward. Skule was flagged for that block, however, and it wiped out a 9-yard scramble by Garoppolo.

It also doesn’t appear as though Steelers quarterback Mason Rudolph was fined for hitting wide receiver Diontae Johnson in his head and neck area following the two players connecting on a long touchdown pass in the fourth quarter.