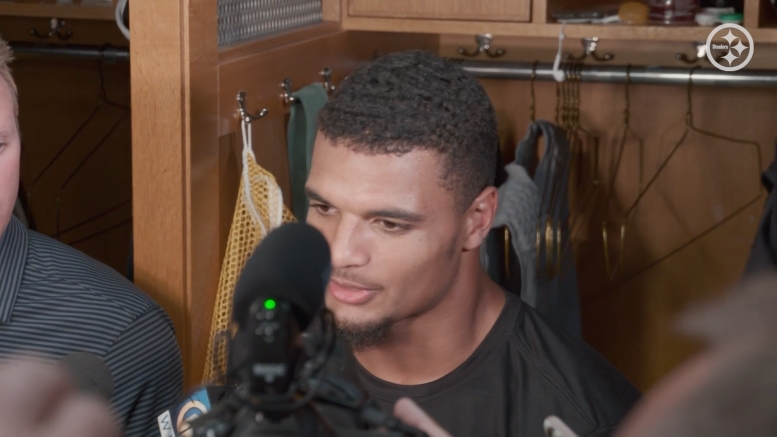 On Monday, Minkah Fitzpatrick was a Miami Dolphin. Come Tuesday, he was officially a member of the Pittsburgh Steelers. After 18 games in 18 months, the South Beach chapter of his career had come to a close after the Dolphins made him the 11th-overall pick of the 2018 NFL Draft, coming out of Alabama as a dynamic and versatile back-end defender.

There were reports that Fitzpatrick was unhappy with the way the Dolphins were trying to use him, asking him to learn and play both safety positions, in addition to cornerback, slot defender, dime, and linebacker, essentially expecting him to play everywhere but along the defensive line, with extensive action in the box.

“I’m not gonna talk too much about Miami”, he told the gathered reporters after being asked about him being unhappy with his role with the Dolphins. “I’m here in Pittsburgh now. I’m excited about being here, and my focus is gonna be here”.

After spending hours in the film room on Tuesday, he took the field for a full practice with the starting defense yesterday as he gears up for a full plate of snaps on Sunday in his first game against the San Francisco 49ers this Sunday.

He doesn’t have the luxury to think about such things, about what he got away from and how that differs from now. “I can’t really say too much. I’ve only been here a little over 24 hours, so I can’t say too much”, he said.

He did offer, when asked about the differences between his two cities, “the overall culture of Pittsburgh and the history of Pittsburgh, it’s a winning culture, it’s a winning team. It’s a team that focuses on being tough, physical, and just going out there and dominating their opponent. Just because you’re 0-2 right now doesn’t mean you can’t turn it around”.

Fitzpatrick pretty much admitted that the New England Patriots tape was bad, chalking it up to playing a really good team. “Last week, it was just two or three plays that could’ve been made that could’ve turned the whole entire game around”, he said of the loss to the Seattle Seahawks. “It’s just learning the game, learning situational football, and we’ll make those steps”.

He has to be part of those steps, and that doesn’t just include making plays but communicating effectively as well. The Steelers haven’t had a ton of success in either department so far for the first two weeks. They made a major investment in him believing that he could offer that.