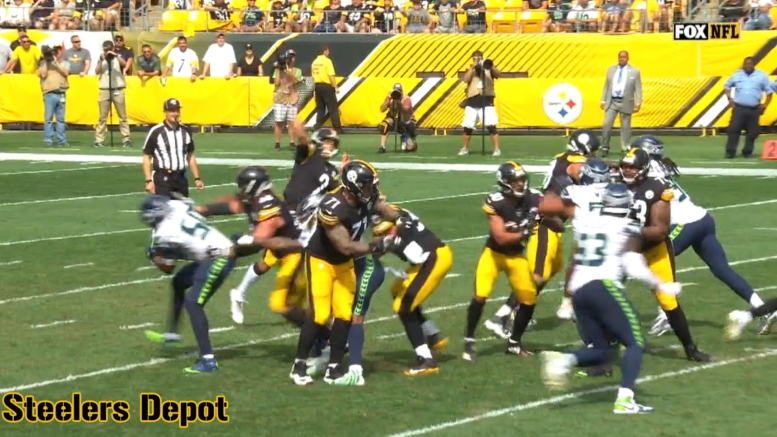 The Pittsburgh Steelers were dealt about as bad a hand as you can get during the course of ordinary events in football when they learned that they would be without their franchise quarterback, Ben Roethlisberger, for the remainder of the 2019 season. He was placed on the Reserve/Injured List and will have surgery on his elbow at some point in the near future, with an eye toward returning in 2020.

But there are still 14 games—hopefully more—to be played before the 2019 season is over, and the Steelers still have a lot of talent to work with. And that perhaps starts with third-year wide receiver JuJu Smith-Schuster, who on Sunday became the youngest player in NFL history to record 2500 receiving yards for his career, surpassing Randy Moss (though Moss accomplished it in his second season, in fewer games).

Smith-Schuster developed a fantastic rapport with Roethlisberger over the course of their first two years together, culminating in a 111-reception, 1426-yard campaign in 2018 that saw the former make his first of perhaps many trips to the Pro Bowl. Now, he has to catch balls from second-year Mason Rudolph.

The 2018 third-round pick did find Smith-Schuster for what is to date his longest play of the season, a 45-yard catch off a flea-flicker, in the third quarter of Sunday’s game amidst a 12-for-19, 112-yard, two-touchdown showing in his NFL debut.

The wide receiver spoke to Joshua Axelrod of the Pittsburgh Post-Gazette yesterday, who told him of the call, “we had that play planned for a while. It was like, we got to use it at a certain moment”. It was a crucial play on Rudolph’s second drive, though it stalled at the Seahawks’ 20 and they settled for a field goal. Rudolph admitted after the game that it probably would have been a touchdown if he got more air under the throw.

“You could see on Sunday we had a little bit of” chemistry, Smith-Schuster said of himself and Rudolph. “We just want to show the world we can be more”. He added, “Mason Rudolph is going to help us win a lot of games moving forward”.

The Steelers did draft Rudolph because they graded him very highly in the 2018 NFL Draft class. They were not even in the market for a quarterback with Roethlisberger, Landry Jones, and Joshua Dobbs, the latter having just been drafted in the fourth round the year prior, but they saw his value when he became available in the third round as too good to pass up for a player they believe has the potential to be a future starter.

Now they’re going to get the chance to find out whether or not he can display that ability early on in his career. Roethlisberger is still under contract through 2021, the same timeframe as Rudolph’s rookie deal, but by then, they’ll have plenty of tape on him to decide if they feel they can move forward with him under center.