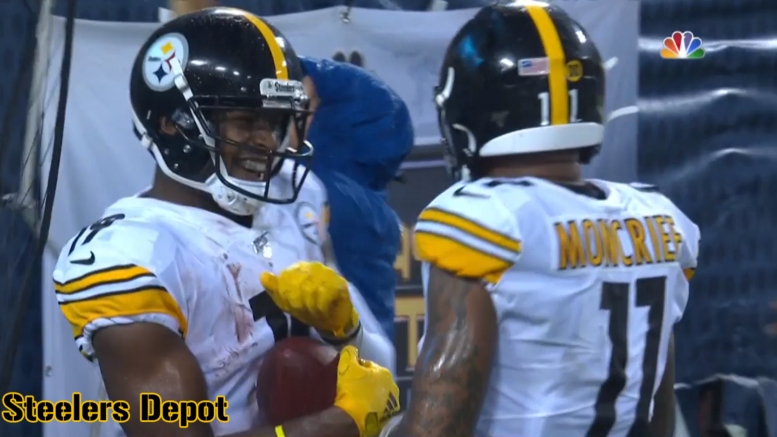 One of the hardest parts of the NFL schedule is for a locker room to be trimmed down from 90 players to 63. Bonds are formed over a period of months and then severed suddenly, only for players to come back to their meeting rooms the follow Monday to a much emptier facility.

That could be even more difficult of a process when the roster is closer, and that seems to be how the Pittsburgh Steelers have been this year. That’s what we’ve been hearing since the start of offseason workouts, about how much closer players are to one another in contrast to years past.

Regardless of comparing and contrasting, that is how second-year wide receiver James Washington feels about his room, which is now down to just seven including the practice squad, the most prominent names now gone being Eli Rogers, Diontae Spencer, and Trey Griffey.

“It’s good this year. We are a tight knit group”, Washington said yesterday, via the team’s website. “There is nothing we don’t do together. Always in the huddle talking, going over plays, in the room we are tight. Off the field we have group chats. That helps us out. You never feel like you are alone. Even if you are messing up you are doing it with someone else”.

Last year’s second-round pick, the Oklahoma State product could be poised for a big second season, depending upon what sort of role he earns, which could be a developing situation throughout the year. JuJu Smith-Schuster and free agent acquisition Donte Moncrief appear to be in-line to start, and Ryan Switzer could log significant time in the slot.

That camaraderie in the locker room, and specifically in the meeting room, however, should help to keep the group in-focus and driven toward a common goal rather than prioritizing individual opportunities and statistics.

Washington certainly struggled through most of his rookie season until he managed to come through with a couple of significant plays late in the year. However, he looked almost like a different player in the preseason, going for over 200 yards with a couple of touchdowns and making catches from a variety of depths.

The group is also tied through tragedy, mutually grieving over the sudden passing of former wide receivers coach Darryl Drake. New wide receivers coach Ray Sherman, who had already been in attendance at training camp as a visiting coach, he seemingly continued much of what Drake had been doing, both instructionally and interpersonally.

A stronger bond in the meeting room should also produce a positive effect on the field. That’s the idea, anyway. The goal is having an unselfish group this year who celebrates one another’s successes as much as their own. Let’s hope it stays that way.