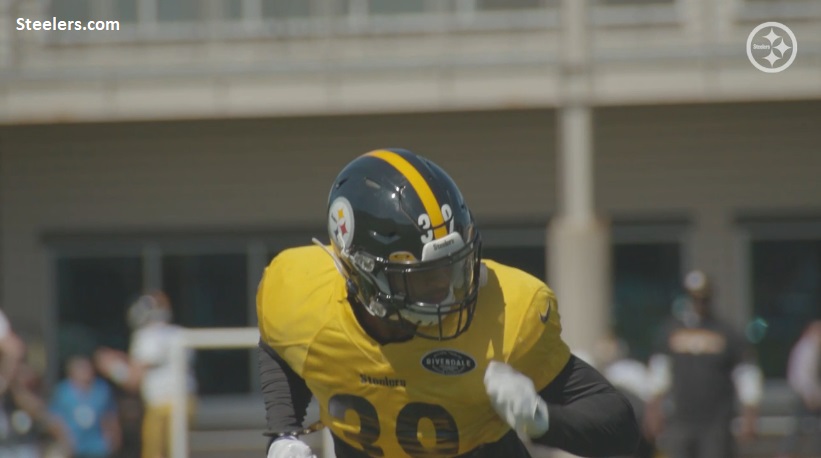 After trading for him Monday night, the Pittsburgh Steelers will start new defensive back Minkah Fitzpatrick at free safety Sunday against the San Francisco 49ers and that’s not surprising with Sean Davis now on the team’s Reserve/Injured list. Even so, Fitzpatrick, who was drafted 11th overall by the Miami Dolphins in 2018 and supposedly unhappy with the way the used him at several different positions on defense, made it clear on Wednesday that he knows he’ll probably have to be a position versatile defensive player for the Steelers as soon as he gets fully up to speed with the playbook.

“I think right now it’s important to anchor me down because I’m learning an entirely new system,” Fitzpatrick said Wednesday. “I think once I learn the system more I will be able to move around and because I think it’s a vital part of my game is my versatility and able to move around whether it be at free, nickel, corner playing in the box covering guys, stuff like that,” Fitzpatrick said after his first practice with the Steelers on Wednesday. “I think that’s an important part of my game and that’s the reason why they wanted me here is to move around. But right now, I do have to anchor down at one position, know that position well, play at a high level and then be able to move around.”

Fitzpatrick also made it clear on Wednesday that he’s not opposed to playing down in the box some like he had to do with the Dolphins, he just doesn’t want to have to do it a lot.

“I mean if I’ve got to do it time to time, yeah, I’m fine, but every single snap, I don’t think that’s what I’m fit for right now with my skill set right now,” Fitzpatrick said. “But if they asked me to do it, like I did some today when playing in the box, you know, fitting the run, covering tight ends and stuff like that.”

Will Fitzpatrick only pay center field Sunday against the 49ers? Probably not and it would be silly for him to stay that anchored at free safety throughout the entire game. He even said he helped some down low during his first practice with the team on Wednesday.

Fitzpatrick arrives in Pittsburgh as a much better slot defender than he is a free safety so it certainly will be interesting to see how well he plays deep in the secondary the next few games and especially when he’s filly up-to-speed on the defensive playbook. How long will it take him to get a full grasp of the Steelers scheme and defensive calls? He indicated on Wednesday that the terminology will likely be the hardest part of his transition process.

“I don’t think it’ll take too long,” Fitzpatrick said. “I just got to learn ways to simplify the game so I can just go out there and just play fast. A lot of it is just word association. Some of the words mean the same thing as it did in Miami or Alabama as it does here, but just different words.”

Fitzpatrick said Wednesday he’s excited about being a member of the Steelers now and has no problem with being forced to jump on a moving train.

“You know, it’s tough, but football is football at the end of the day,” Fitzpatrick said. “Once you learn the terminology and you learn the verbiage of the game and the smaller differences in the game, you’re good. Like today, I didn’t feel out of place at all. I didn’t feel like I was in the wrong spot at all because like I said, football’s football. I was here yesterday for about four or five hours just going over film with coaches and just breaking stuff down and I feel like I’m in a good spot and I’ll definitely be ready for Sunday.”