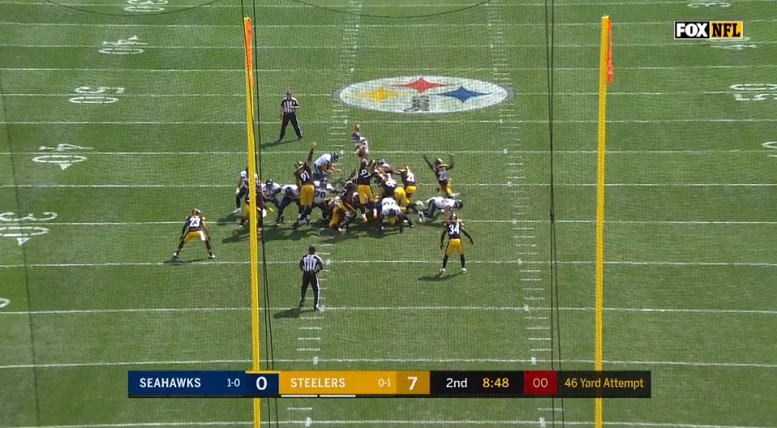 The Pittsburgh Steelers Sunday home loss to the Seattle Seahawks included several small turning points and unfortunate mistakes. One that qualifies as both of those things happened midway through the second quarter and during a successful field goal attempt by the Seahawks.

During the successful 46-yard field goal attempt by Seahawks kicker Jason Myers with 8:48 left in the first half, Steelers defensive tackle Daniel McCullers was flagged 14 yards for unnecessary roughness for presumably making contact to the head and neck area of the defenseless Seattle long snapper. That penalty resulted, in the Seahawks getting a first down and thus they chose to forego the successful field goal. The very next play Seahawks quarterback Russell Wilson connected with tight end Will Dissly on a 14-yard touchdown pass.

After the game, Steelers head coach Mike Tomlin was asked to describe what happened during that field goal attempt that included McCullers being penalized.

“Supposedly he made contact with the head and neck area maybe of the center,” Tomlin said. “That wasn’t his intention. That wasn’t our intention. We were trying to skinny the gap. We’ll take a look at the video.”

I have a slowed down version of the field goal attempt below and I guess it’s understandable why McCullers was penalized. That said, Tomlin and special teams coordinator Danny Smith probably might want to rethink any strategy that includes McCullers needing to skinny a gap moving forward.

That four-point swing midway through the second quarter is obviously easy to point to after the fact due to the Steelers ultimately losing the game by two-points. To make matters even worse, the simulated play clock shown on the television screen by FOX on Sunday shows that it had reached zero before the long snapper snapped the football. It had probably reached zero a good quarter to half a second before the football was snapped. Had a delay of game penalty been called on the Seahawks, who knows what all would have transpired after the yardage was assessed.