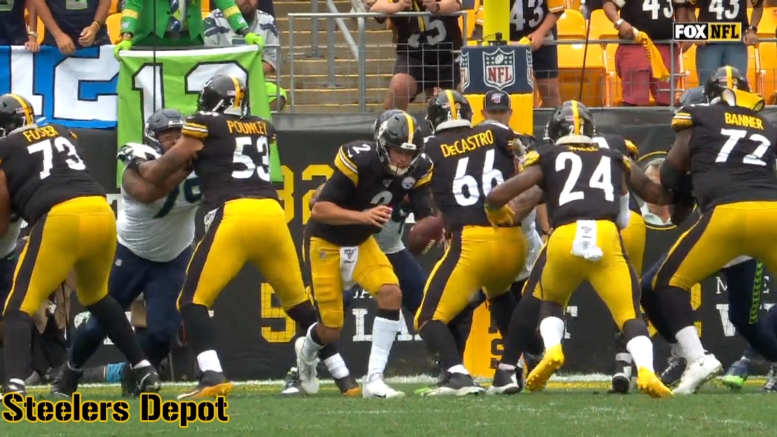 For as down as Steeler nation is right now, perhaps they can at least take some solace in the fact that Mason Rudolph looked good in his NFL debut, about the best relief appearance we have seen by a quarterback in Pittsburgh in some time—short of that time Ben Roethlisberger came off the bench for Landry Jones a couple years ago.

Rudolph, the Steelers’ first of two third-round picks in 2018, won the backup job this summer after serving as the number three to Joshua Dobbs as a rookie. But he beat Dobbs so handily this year that they traded him away. And now he’s going to start 14 or more games provided that he himself stays healthy and plays decent enough football.

After some rough edges to start the game, missing on his first three attempts—including a drop that was intercepted—Rudolph finished up completing 12 of 16 passes for 112 yards and two touchdowns, both caught by Vance McDonald in the red zone. His highlight pass, and the first completion of his career, was a 45-yard flea-flicker to JuJu Smith-Schuster.

Almost as big as his performance itself is the apparent fact that he already has this veteran team behind him. David DeCastro was effusive in his praise of the young quarterback in the locker room after the game and only lamented that they couldn’t get him the win. Smith-Schuster said that he’s going to help the team win a lot of games.

Sure, it’s easy to say all of that about Rudolph right now after you learn that Roethlisberger is going to be shelved for the 2019 season, and there are still 14 games to play. But everyone in that locker room knew the deal when he was drafted. He was the potential heir apparent—and at that time, Roethlisberger was heading into his penultimate year. This is a potential preview of the future. He had better make the most of it.