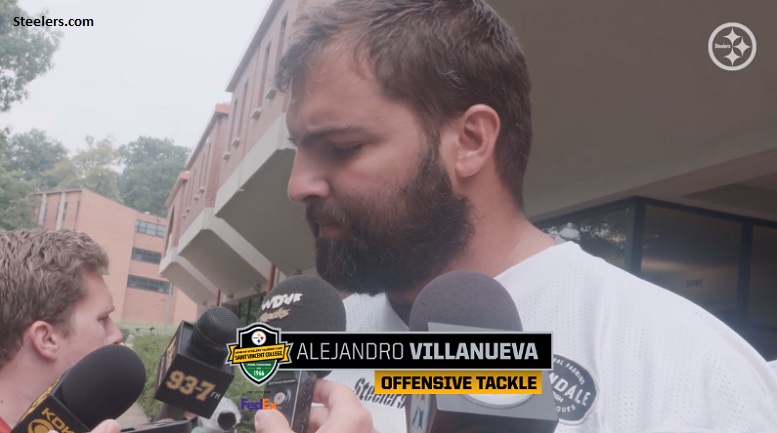 Alejandro Villanueva has been with the Steelers since the early portions of the 2014 season and every year around this time he has heard the same expectations whispering in the winds about a possible Super Bowl run.

While the Steelers have failed to make a Super Bowl appearance during his tenure, that did not stop the same questions about a possible Super Bowl run from appearing every offseason. In Pittsburgh, Super Bowl expectations were just as much as a mainstay as the black and gold colors themselves but that all changed this offseason.

“Every year that I’ve been here, the question that we always have in the off season is, when we prepare up until this point has been, you have so much talent, you have so many great players. Is this the year you’re gonna win the Super Bowl?” Villanueva tells Mike Prisuta from DVR Radio. “And I think for the first time. The question has been this off season you don’t have the players that, you know, we all thought we’re going to take to the Super Bowl, now what are you going to do?”

For the first time in Villanueva’s tenure, the Steelers are not being called Super Bowl favorites. After the loss of talented players such as Antonio Brown and Le’Veon Bell and the revival of the Cleveland Browns, the Steelers have found themselves flying under the radar but for Villanueva and the rest of the team, this has only pushed them to work that much harder.

“When you have a question such as that in the off season, it motivates you to work a lot harder and it motivates the team to find ways to answer that question,” says Villanueva.

While Super Bowl expectations have not clouded the team this offseason, the team’s new found work ethic and team-oriented environment sure has. And though Villanueva admits that this all sounds good in theory; he also recognizes that the Steelers will have a big opportunity to send shockwaves throughout the National Football League should they prove that unity is a force so strong that it can outpower individual talent.

“This is a business and this is as cutthroat as it gets, the only thing that matters is who wins the game. So hopefully this sentiment can be aligned and it can translate into victories,” says Villanueva. “If so, then it will be a narrative that could be spread out across the NFL that yes, you know, this togetherness, teamwork and all that stuff overcomes talent and overcomes any other issues that you might have in the off season that might prevent you from accomplishing those goals.”

Villanueva is not ready to say if he thinks his team’s new found attitude will work, instead preferring to let the team’s play on the field speak for itself. The veteran offensive lineman is sure of two things though – the team is working harder than ever and that it feels good to be a Steeler once again.

The Steelers will have the perfect opportunity to test out their newfound attitude on September 8 when they take on the reigning Super Bowl champions. For Villanueva and the rest of the team there would be no bigger statement than going into the home of the Super Bowl champions and defeating the New England Patriots.