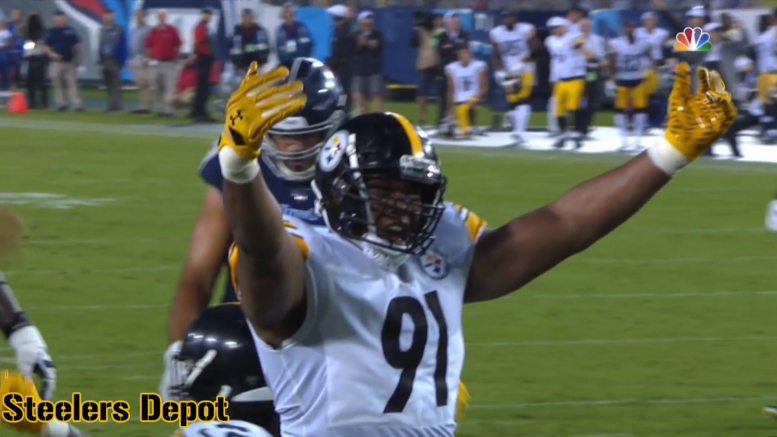 Stephon Tuitt hardly played on Sunday, but he dominated when he did, totaling a pair of sacks, one of which resulted in a safety, over 11 snaps for the Pittsburgh Steelers against the Tennessee Titans. Not bad for an eighth of a day’s work, to be sure.

And that is the type of talent and potential that he has flashed throughout his career since he was selected in the second round out of Notre Dame back in 2014. He has had some excellent, dominating games, and put forth some strong seasons, but he and the rest of the team are waiting on him to put it all together for an entire year.

Aside from health—he’s missed at least two games a season since his second year in the league, the first in which he was a full-time starter—consistency has been the issue holding him back from being regarded as among the top defensive ends in the 3-4 system around the league.

That’s what Cameron Heyward has been able to bring to his game over the course of the past two years, yielding a total of 20 sacks in that span—the same number that Tuitt has had in his first five seasons—and which is why he has been to the Pro Bowl in both years.

“It’s not more me showing it for other people, it’s just me consistently doing it”, Tuitt said. “Within the defense we’re going to have weeks in and weeks out when one guy is doing more than another, we have a lot of terrific guys out there. And sometimes, some weeks I’m going to be holding up two-to-three (blockers) and some other guy is going to make some plays. So I’m really OK with how my position is”.

It’s true that we have a tendency at times to make too much of one individual player’s numbers without taking into consideration the totality of his contributions and how they lead to successful plays for others, and thus for the defense as a whole.

One thing Tuitt does do is get pretty consistent pressure, even if he doesn’t always record the sack or the tackle himself, or finish the play generally. He did improve on his ability to finish tackles last season—at least according to Pro Football Focus, he didn’t miss any, where in the past he would have several misses during the year.

He’s not the only one for whom the ‘breakout season’ has been long awaited. Bud Dupree is another. They do appear to be set up to potentially have the best seasons of their careers, but we know that often doesn’t amount to much.