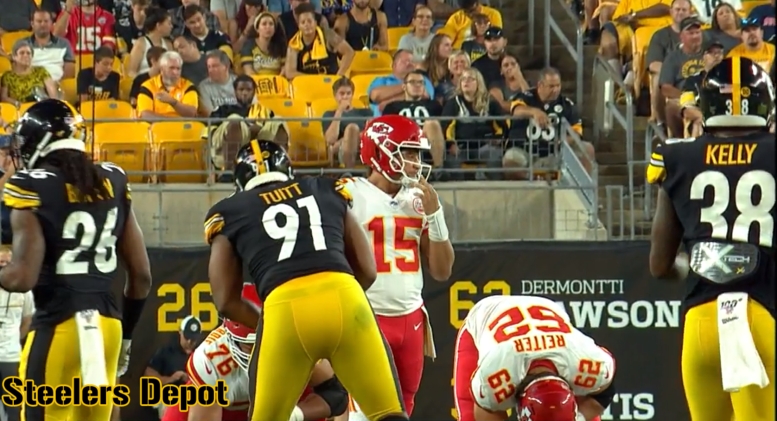 Ordinarily, teams might be prone to way until the regular season to break out a look that they had not previously shown in the preseason or in open practice sessions before. The Pittsburgh Steelers elected to do that against the Kansas City Chiefs—perhaps in part influenced by the quality of opponent—breaking out a three-safety nickel defense that they had not shown in training camp.

As Mike Hilton tells Ray Fittipaldo, “It was something we kind of kept to ourselves in camp, but I think it’s something we’re going to use throughout the season”. He added, “I think it will work well for us”.

In the look, Hilton was subbed out in favor of Kameron Kelly, who along with Sean Davis was used alternately either in the slot or in the back end. As an aside, the fact of this package and its potential to be a feature in the defense this year greatly strengthens Kelly’s chances of making the roster, since there are few on the 90 who can play both in the slot and at safety.

The other personnel on the field, of course, were Steven Nelson and Artie Burns (starting in place of Joe Haden) at cornerback, with Terrell Edmunds at strong safety. It’s not unprecedented for a team to use a safety as its nickel defender, however. In such cases, I frequently recall Deon Grant in that role for the New York Giants several years ago.

Earlier in the offseason, defensive backs coach Tom Bradley alluded to the possibility that they would also see an expanded use of the seven-defensive back ‘dollar’ defense that only made brief cameos in 2018, suggesting that its limitation was largely due to injuries that prevented them from having the desired personnel on the field.

It’s quite possible that by the time the regular season starts, the Steelers will have nine defensive backs in whom they are comfortable playing, including the starting five in Haden, Nelson, Hilton, Edmunds, and Davis. Sutton, Kelly, and Artie Burns would be another eight, and a fourth safety—likely either Jordan Dangerfield or Marcus Allen, who earlier in the offseason was mentioned as a possible dime linebacker candidate—could join in the mix as well.

Having that many defensive-capable members of the secondary, many of whom are able to line up at different positions from one play to the next, would make it much more difficult for offenses to put the Steelers into matchup mismatches, something that has been a problem for many years, leaking into the late seasons of Dick LeBeau’s tenure and remaining unresolved through the 2019 season.

Including more athletic linebackers in Devin Bush, Mark Barron, and perhaps Ulysees Gilbert III, the defense should have much more speed and athleticism, and at least on paper, be less vulnerable to being burned as a result of the offense audibling a defender into a coverage he’s not comfortable fulfilling.