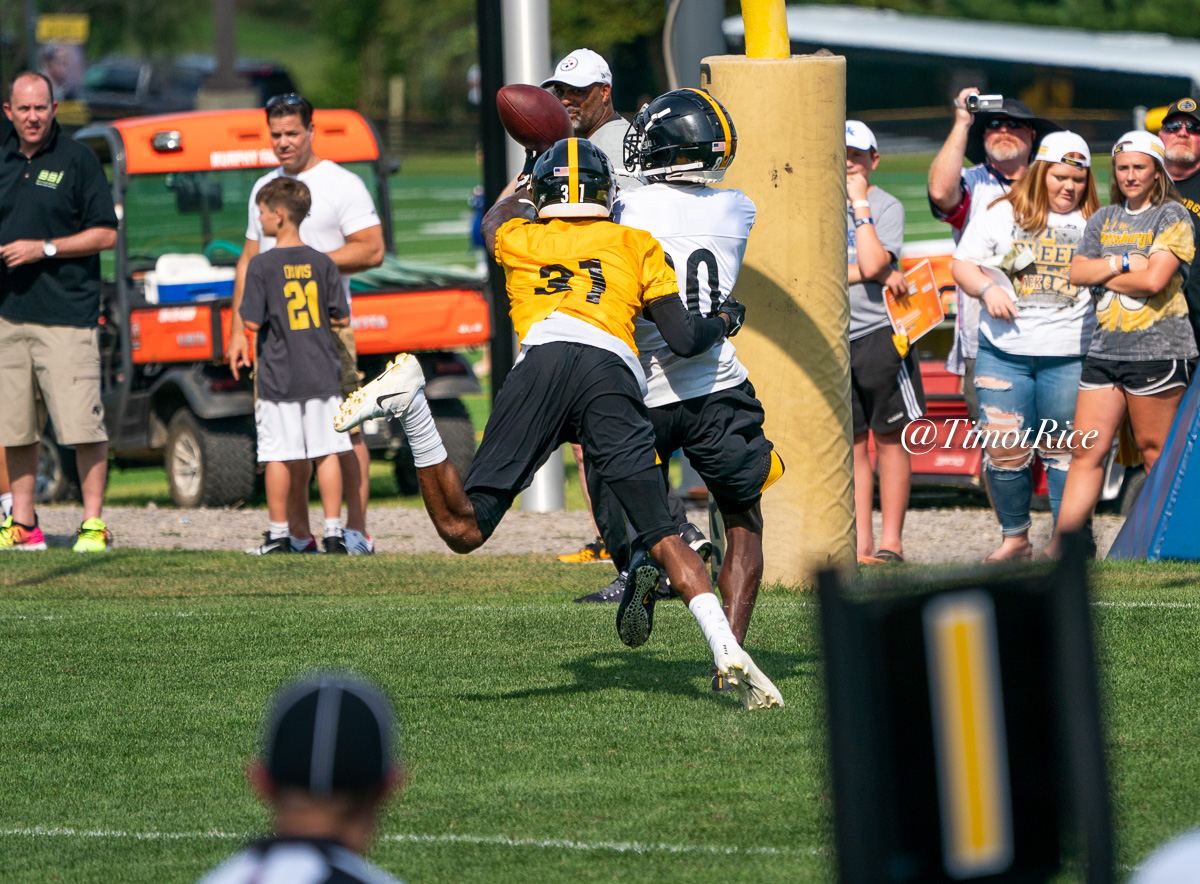 This topic is a little vague to be the matchup to watch but with it being preseason and not knowing exactly who will be playing or how much we’ll take look at this with a wider lens.

Let’s start with a look back to last season.  If you have young children this may be too troublesome for their eyes. Week two, the Kansas City Chiefs came to Heinz field for and exciting game and didn’t disappoint. A 42 – 37 loss that had 21 point quarters by each team.

For Patrick Mahomes, it was just his third career start but you wouldn’t know that from his performance.  He was efficient with 23 completions in 28 attempts for 326 yards and (gulp) 6 touchdowns. Those touchdowns were spread about to five different receivers but it was their big three that stood out.

The talented combination of Travis Kelce, Sammy Watkins and Tyreek Hill combined for 18 receptions on 23 targets, 299 yards and 3 touchdowns with each of them having a reception of at least 30 yards.  The best tight end in the game and receivers who run the 40 in 4.39 and 4.29, respectively would give any team issues. And for good measure they added Mecole Hardman in the draft that ran a 4.33.

How did the Steelers pass defense perform in that game? They had 1 pass defensed and that was by Stephon Tuitt and 0 interceptions. Joe Haden did not play in that game dealing with a strained hamstring. There were also communications issues in the defensive backfield leaving Kelce open multiple times.

There was an obvious need to add speed and talent to the defense and that is what the Steelers did with multiple linebackers and defensive backs. They brought in former Chief Steven Nelson and Mark Barron via free agency and Devin Bush and Justin Layne in the draft.

One other addition could be a key as well and that is Senior Defensive Assistant/Secondary coach Teryl Austin.  He was the defensive coordinator for Cincinnati last year and also faced the Chiefs. The Bengal defense did give up 38 points but the numbers for the big three were slightly better. They combined for 16 receptions on 22 targets for 237 yards and 1 touchdown. Not shutting them down completely but only allowing 1 score is an accomplishment.

What to Watch For

Communication – As we all know, this has been an issue in the past. From the sideline, not making sure the right groupings are on the field and from the players that are out there, seemingly not communicating coverages correctly leading to open receivers.  These things cannot happen anymore if they want to be a championship level team.

Varying the Coverage – It’s the preseason so don’t expect a specific scheme to try to shut down the passing game.  This is the time to try different approaches and see what has the potential for success. I’d like to see Press coverage with a jam to try and limit the release of the track team of receivers and some bracket coverages to have defenders under and over the routes. And this isn’t just on the corners.  There are a lot of unknowns with the safeties so how they diagnose and play the routes will be of interest.

Can the DB’s stay in phase 1 on 1 – Did I mention the Chiefs receivers were fast? With 3 speedsters and an All-Pro TE you can’t double cover everyone so in some situations we’ll see single Man coverage on the outside. Will the DB’s be able to stay close enough to make a play on the ball? There has been an emphasis on making more plays on the ball and forcing turnovers so this will be as good a test as any.

Who is going to cover Kelce? – This is another issue that must be solved. The Steelers have struggled to cover tight ends. Against Tampa Bay in week one of the preseason they gave up 7 receptions for 84 yards and a TD to Tanner Hudson a former Southern Arkansas Mulerider (great mascot). No offense to Hudson but he’s no Kelce. There will probably be multiple options to try depending on who plays including Barron, Sean Davis, Terrell Edmunds and Kameron Kelly could all get a shot each having some size to try and match to the 6’5” Kelce. Hopefully, we’ll see some improvement in the coverage of the tight end regardless of whom the tight end is and who is in coverage.

Plays on the Ball – There has been an emphasis throughout camp to improve the turnover numbers particularly through the air. Coach Austin has had the defenders actively using the JUGS machine to work on their hands.  Against Tampa Bay that had a solid performance with 5 pass break ups, 3 by linebackers and 2 by safeties, and one interception on a two point conversion. This is athletic ability combined with understanding of routes coupled with effort and we’d all like to see the improvement continue moving forward.