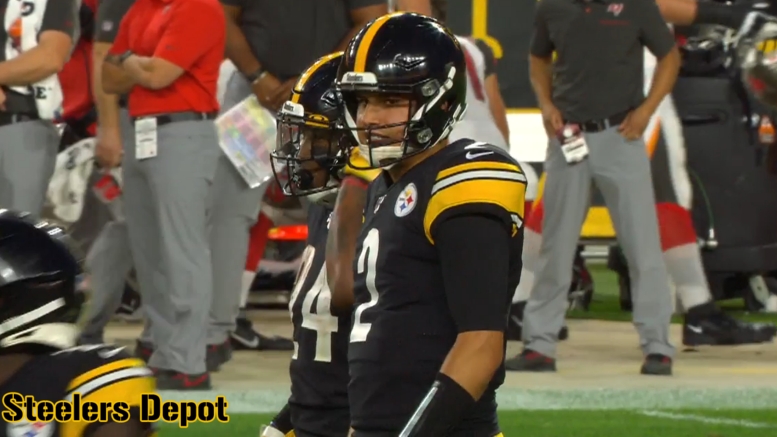 The Pittsburgh Steelers’ backup quarterback competition is well underway, with all three at the position not named Ben Roethlisberger getting extended playing time during the night, in spite of the fact that they didn’t control the ball for much of the early going.

Joshua Dobbs started the game, but he had his ups and downs. The third-year man completed a couple of big passes to James Washington, including a 43-yard grab early in the game, but he could not but the ball in the end zone. He finished five for eight on the day for 85 yards, but he also scrambled twice for 44 yards, including a 36-yarder on third down.

Mason Rudolph checked in with about five minutes to play in the first half, starting the drive from his own 36, and was able to lead a seven-play, 64-yard touchdown drive, which he capped off with a nice eight-yard back-shoulder connection with his college teammate, Washington.

The defense quickly got him the ball back at the 27, but his second drive, inside of the two-minute warning, only produced a field goal. However, he would come back with a second touchdown drive of 65 yards in the third quarter before exiting, ultimately completing to rookie tight end Zach Gentry after showing great patience holding on to the ball.

One of the plays I liked most from Rudolph came on an incompletion. He showed significantly improved football and mobility, both in the pocket and in escaping the pocket, after he was under duress. He managed to flush out to his left and get a pass out of his hands, though he couldn’t connect.

But that is one of the things that we needed to see from Rudolph, and that we didn’t see from him last year. He had just talked about how he spent time this spring working with a footwork coach to improve that area of his game. It appears upon initial inspection that it helped.

The second-year quarterback scored three times on his four possessions with two touchdown passes, ultimately completing five of eight pass attempts for 91 yards. Much of that came from a big catch-and-run from Johnny Holton, so it wasn’t all him, but all in all, it was an encouraging effort.

I don’t know that that significantly moves the needle in any meaningful way between himself and Dobbs as they compete for the backup quarterback spot. But one thing that is interesting to note—and which we will certainly talk about more tomorrow—is that Mike Tomlin gave number four quarterback Devin Hodges extended playing time, ultimately four full drives spanning about 23 plays. He did produce 10 points, including a touchdown to Tevin Jones, but his final possession ended with Kevin Rader fumbling.

We’ll look more in-depth into what the decision to give Hodges such a long look could mean going forward. That is part of the story. But right now, the focus is on the fact that the Steelers’ backups looked solid against the Tampa Bay Buccaneers, with Rudolph doing the most in the first of four preseason games to state his case.