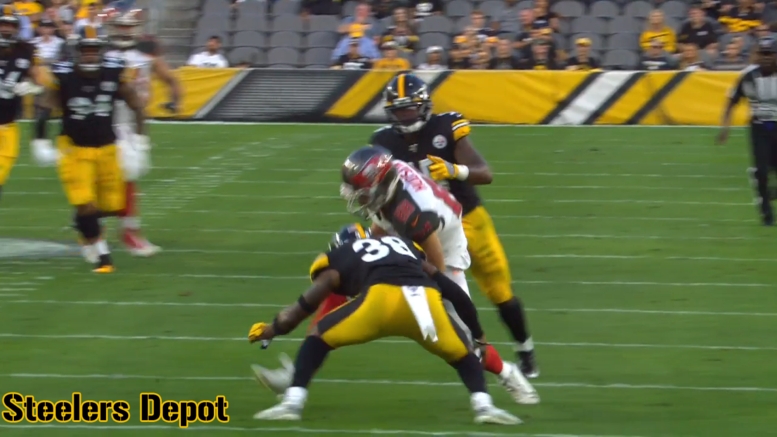 It’s been a long journey from Milan to Minsk for Kameron Kelly, the first-year safety whose most recent foray into the professional football world consisted of the opportunity to play in every game of the San Diego Fleet’s history before the team’s parent league, the Alliance of American Football, folded after just eight games.

Originally signed by the Dallas Cowboys as an undrafted free agent, the defensive back was brought in by the Pittsburgh Steelers in April after the AAF folded, and has been a mainstay since, to the point where he appears to be firmly inside the bubble for a roster spot, even ahead of tonight’s game.

“It’s kind of the icing on the cake, just make sure I show them that I can be consistent, make plays”, he said about the preseason finale, where he is sure to start. It will be more interesting to see who starts alongside him, if anything, assuming Terrell Edmunds doesn’t play, or if he does, who comes in after him.

Kelly has been getting first- or second-team reps since OTAs, the first-team reps coming whenever they have been made available due to injuries suffered by Sean Davis. That included a long stint in OTAs and then multiple opportunities in training camp and the preseason. But he doesn’t get ahead of himself about what that means.

Behind Davis and Edmunds, outside of Kelly, there are two holdovers from last season in veteran Jordan Dangerfield and second-year Marcus Allen, who at this point appear to be competing against one another for one spot. Also in the group are rookie undrafted free agents P.J. Locke and Dravon Askew-Henry.

Kelly has gotten a lot of playing time during the preseason and in training camp. He supposedly leads the defense in practice interceptions, though nobody has gotten one yet in a game. Perhaps he’s hoping to be the first tonight, but if not, he understands that he has achieved his priority task above anything else.

“I feel like I left a lot on the field. I feel like there’s a couple plays here and there I could’ve made, but I feel like as far as an assignment standpoint I’ve been pretty good, as far as making sure I don’t make any assignment mistakes”, he said.

“That’s the biggest thing. The plays are gonna come. Not every play’s gonna come to you every game, but as long as I’m handling my assignments, I feel like that’s the part that I can do”.