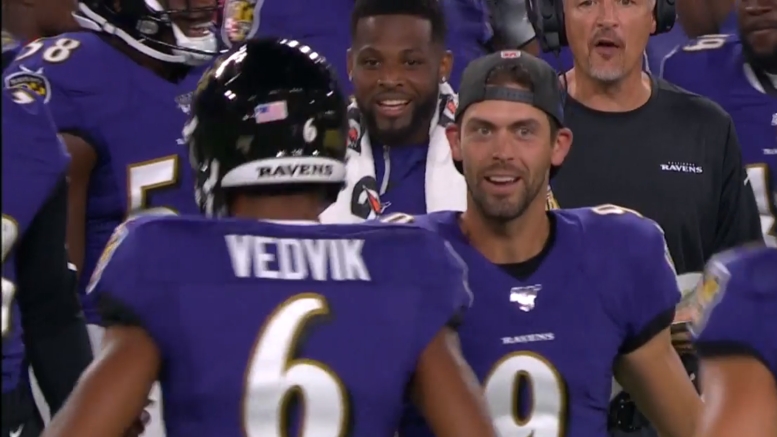 The Baltimore Ravens dominated the Jacksonville Jaguars last night, securing something like their 15th consecutive win in the preseason. The last time they lost was in 2015, just days before Lamar Jackson made the first collegiate start of his career. He now helped lead them to a 29-0 shutout.

But arguably the most notable performance of the game came from—of all people—the kicker on their roster not named Justin Tucker. Kaare Vedvik originally signed with the Ravens as a college free agent last year, but, of course, being in camp with Tucker gave him no chance of actually making the roster.

Late in the preseason a year ago, he was the victim of a serious physical assault that resulted in him suffering significant head and upper body injuries. He would go on to spend the season on the Reserve/Injured List.

The Norwegian-born kicker made a good impression on his teammates and coaches, however, also showing a big leg, so it’s no surprise that he returned for a second offseason. At this point, the Ravens are looking to boost his trade value, though, and he did that last night.

Vedkik scored 14 of the Ravens’ 29 points on the night, including four field goals and two extra points. He connected from a long of 55 yards, which is tied for the longest field goal ever made in Pittsburgh Steelers history.

But not only that, Vedvik also punted twice for a total of 111 yards, including a long of 58, though neither kick pinned the Jaguars down inside their own 20, due to the Ravens’ field position at the time of the punt.

But his big leg was clearly on display both with his field goal kicking and his kickoffs. Throw in punting as well, and we may see him emerge as one of the most sought-after targets for trade by kicker-needy teams in a few weeks’ time.

The question is, will the Steelers be among those kicker-needy teams? There appears to be optimism that their own Pro Bowler, Chris Boswell, has turned things around after he missed seven of 20 field goal attempts in 2018, in addition to five extra points. But if he falters during the preseason, they know that they will have to move on.

In such an event, one has to wonder if they could manage to negotiate a trade with the Ravens. Intradivisional trades are rare, but they two happen. The Steelers have traded a couple of times with the Cleveland Browns, acquiring Justin Gilbert and sending Sammie Coates their way.