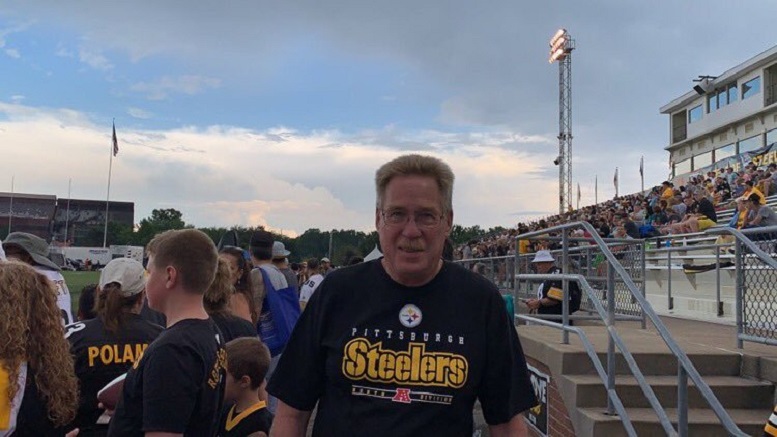 I was born in South Connellsville, Pa. in 1961 and have been a Steelers fan my entire life.  I remember watching my childhood heroes on black and white television sitting cross legged on the floor charting rushing yards for Franco and Rocky when both were chasing the then elusive 1,000 yard season.  I was barely a teenager when the Steelers won their first Superbowl in 1975, then doubled down and won it again in 76!

Once I got a little older, I was able to hitch rides to Latrobe in the summer during training camp and see the Steelers practice.  I was in awe at the sheer size and speed of these guys who I had only seen on TV.  The Steelers once again won the big game in 1978 and again in 1979.

I graduated high school in 79 and entered the adult world.  I didn’t have a lot of extra time to spare to attend camp.  The last camp I attend was on a beautiful August day in 1980.  My favorite player of all time was there looking a little older yet just as imposing as ever.  Jack Lambert in all his toothless glory signed my Terrible Towel.

Life took me to the United States Navy in 1981, marriage, kids and a career in construction management.  We settled in Baltimore in 1987 yet my love for the Steelers never left me. I watched them on TV every chance I got and never embraced the Colts or especially the Ravens.  I displayed my Steeler pride every chance I got despite where I lived.

I never made it back to Steelers camp, that is until yesterday!

I had a brief Twitter exchange with the folks over at Steelers Depot recently who offered me an opportunity to be their guest and attend the annual Friday night practice held at Latrobe Memorial Stadium known as Friday Night Lights.  How could a life long, die hard Steeler fan say no!

I was put in touch with site follower and contributor David O. and we set off early Friday afternoon arriving at the stadium an hour or so before the start of practice.

I was surrounded by a sea of black and gold wearing Yinzers!  No team in my opinion represents their team much like Steelers fans do.  For a Friday practice in the dog days of summer, there were face painted Yinzers, bead wearing tattooed Yinzers and player jersey wearing Yinzers of all ages.  I saw several expensive looking trucks decked out in black and gold and a drum band complete with logo drum kits.  The 6 super bowl trophies were on display for fans to have their picture taken with.

The economic impact of the NFL holding training camps in these small towns across America is evident and readily apparent.  Everywhere we went, we saw people attired in Steelers gear.  In the local Hotel we stayed, the lobby was filled with fans.  The local restaurant where we had a late dinner was filled to the rafters with fans.  The Ravens once held camp in small town Westminster where I live.  The decision was made to move to their camp to the Under Armour Performance Center where fan access is limited and tightly controlled.  This deprives small businesses from benefiting from the throngs of fans who attend these open practices. It’s a shame that more teams don’t follow the example of the Steelers and have open camps and practices.

We made our way around the stadium where we met with Steelers Depot writer Alex Kozora.  Alex was flanked by writers from other sites and a photographer named Tim.  Introductions all around and I was made to feel part of the fraternity, no family.

When the Steelers arrived in regular yellow school buses to the sounds of ‘Renegade’ by Styx, the stadium erupted!  The players had approximately 20 minutes to engage the fans lining the fence around the practice area and sign autographs.  It was immediately apparent the most popular and engaging player was JuJu Smith-Schuster.  JuJu ran around the perimeter of the stadium encouraging the fans and stopping along the way and signing all manner of memorabilia.  I was content to observe the players having not had the foresight to bring a Terrible Towel!

I was surprised by the size of some of the players.  While most players in the NFL are physical specimens in their own right, the players I observed were in no way obese.  Alejandro Villanueva, David DeCastro, Maurkice Pouncey and Matt Feiler are all very large men.  All over 6 foot 4 and 275 pounds, they are in no way fat.  These men are physically fit human beings.  Watching these guys on TV in no way gives one an idea of how big they truly are.  I was surprised by how tall Bud Dupree and Anthony Chickillo are. T.J. Watt although not in uniform was a well formed, sculpted athlete The corner backs and safeties are all very muscular with the majority of the wide receivers being tall and lanky yet physically fit.  The only player I saw that I would consider obese was seventh-round draft pick Derwin Gray from Maryland.

Once practice got underway, there was so much going on that it was hard to follow each position group or each different drill.  The backs on backers drill was held on the opposite side of the field and hard to follow so I focused on a wide receiver versus defensive back drill.  The QB was throwing passes to wide receivers running routes while covered by defensive backs on a rotational basis.  The sheer speed of the players and the precision of the route running of the elite wide receivers was evident.  There were several breath taking catches and dramatic pass break ups.  There were 2 players who caught my eye.  James Washington the second year wide receiver from Oklahoma State ran precise routes and caught every ball thrown to him cleanly with his hand.  Third year undrafted player Trey Griffey was impressive catching everything cleanly with the hands away from the body.

I paid attention to the quarterbacks.  Ben didn’t practice so the passing was left to Josh Dobbs, Mason Rudolph and Devlin Hodges an undrafted rookie.  Quarterbacks Dobbs and Rudolph are head and shoulders ahead of Hughes.  Their pocket presence, control at the line of scrimmage, foot work, accuracy and velocity of the thrown ball of far ahead of Hughes who had passes fluttering and struggled at times with accuracy.

The 7 on 7 and 11 on 11 drills were exciting! There was real hitting with the stick of the night given by Jordan Dangerfield with a pad cracking tackle that was heard around the stadium.  Rookie running back Benny Snell is very quick for a man his size.  First round draft pick Devin Bush manned the middle of the defense and looked solid on each rep that he played.  He attacked the line of scrimmage and seemed sure of his assignments during pass protection even coming up with an interception on a tipped ball.  James Conner scored on a goal line drill as did Josh Dobbs on a QB draw.  I saw Ryan Shazier walking on the field.  The guy is a walking talking miracle.

I watched Coach Mike Tomlin from time to time interacting and encouraging his players.  Tomlin was always supportive in his public comments although I saw him having a private discussion with Chickillo after a brief scuffle with a teammate that may not have been a supportive dialog!  Special Teams Coach Danny Smith was all over the place during special team drills.  He was vocal, loud and animated.

Aside from the action on the field, I was in the company of Kozora, writer for the site Steelers Depot.  Alex is a young man probably 25 or so and very slight of build.  Alex is a wealth of knowledge when it comes to Steelers football.  I took to calling him Rainman as Alex knew each and every player by number having memorized the entire 91 man roster.  He knew where each player went to school, what round they were drafted in and their general combine scores!  Alex was observant of the action on the field and picked up things that the average fan (me) had no idea were taking place.

Within a few minutes of the players lining up for stretching, Alex knew who was practicing and who wasn’t! He knew who returned from injury and who didn’t. Alex sat with a notebook in his lap taking notes of the action in some strange writing of symbols and letters that make sense only to him.  Alex was patient each and every time I had a question and was generous in the sharing of his knowledge.  Alex was Tweeting things taking place on the field, taking handwritten notes, engaging those around him.  Alex was critiquing players during drills and despite the action taking place on the other side of the field, charted each and every repetition of backs on backers while also commenting on and writing about the wide receivers against the defensive backs.  The young man was incredible.

Tim Rice is a photographer who was also amongst the group.  Tim was using some type of magic to capture still images of players in motion and then tweeting the photos from the stadium using his camera.  From time to time Alex would notice something such as a player with his groin taped and ask Tim to photograph it.  Within seconds a high quality image was being sent out on the web.

The night ended around 10PM with a majority of the fans still in the bleachers.  I have to admit, with my day starting at 430 AM, working half a day, driving over 4 hours and taking in the practice I was spent!  The event ended with a fireworks display.  David O and I had a late dinner then retired to the hotel around 11.

The entire experience is one which I will remember always.  I will not be able to watch a Steelers game without thinking about what I was able to experience thanks to Steelers Depot.  I will now understand a little bit better the amount of work involved delivering the quality content that Steelers Depot delivers on a daily basis.

My thanks to Dave Bryan, David, Alex and Tim for welcoming me to the Steelers Depot family.