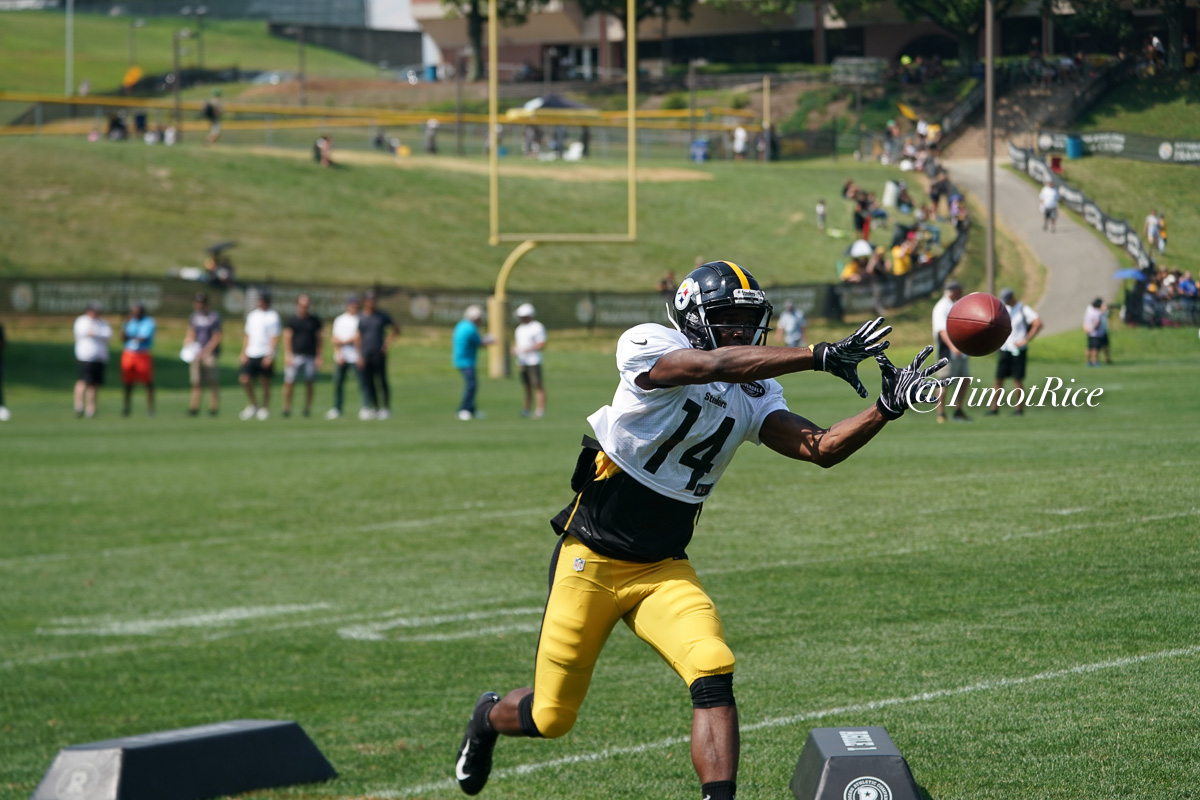 One of the things that outside observers of training camp have to keep in mind is that it’s just that: a camp in which teams are training. It’s a lengthy process of growing and getting better, evolving rather than remaining static, both on the collective and the individual level.

A player having a slow start to camp can pick it up. Conversely, somebody who is all over the field initially can wind down as the process wears on. This year, first-year wide receiver Tevin Jones was among those players for the Pittsburgh Steelers who got off to a slow start, but the 2018 practice squad player has been getting better day by day, and even earned some first-team reps in yesterday’s practice.

Among the quarterbacks who have been throwing Jones the most passes during the length of his tenure in Pittsburgh has been Joshua Dobbs, the 2017 fourth-round pick who won the backup role last season and is battling to retain it this year against Mason Rudolph.

Earlier this week, he was asked to share his thoughts on Jones, the 26-year-old, and the growth that he has made since his first training camp in Pittsburgh a year ago. “I think it’s comfort”, he said in an interview through The Fan. “It’s comfort in being able to play different positions in the offense, running different routes whether it’s inside or outside, and then also being able to make those strong catches, contested catches over the middle and the outside, go down the field and catch footballs”.

Jones is an interesting size prospect at 6’2” and 220 pounds, and he also has some speed to him as well, but he was never a productive college player, and has obviously struggled to break through at the NFL level, though he has continued to be given chances. Pittsburgh has so far been his best chance, and that’s largely because of the quality of opportunity, which he has been making the most of.

“He’s been doing a good job, and it’s really good to see him”, Dobbs added. “He took a big step throughout last camp and then throughout the season, so to be able to pick up where he left off in OTAs and come into camp motivated, focused, and making plays, it’s good to see, and I know he’ll make plays come game day on Friday and the ones moving forward”.

Truth be told, however, Jones is going to have a very difficult time making the 53-man roster with the Steelers this year, almost irrespective of how well he might do individually. The team figures to have at least four roster locks at the wide receiver position already in JuJu Smith-Schuster, Donte Moncrief, Diontae Johnson, and James Washington.

It’s likely at this point that they will keep six wide receivers, but the frontrunners for those spots are the two other receivers returning from last season’s roster, Eli Rogers and Ryan Switzer.

Also in the mix is Diontae Spencer, the CFL player who has been making a lot of plays since training camp opened, and even back to the spring. Johnny Holton has been on the come, as well. His best bet, as with any play in his situation, would be to stand out on special teams.