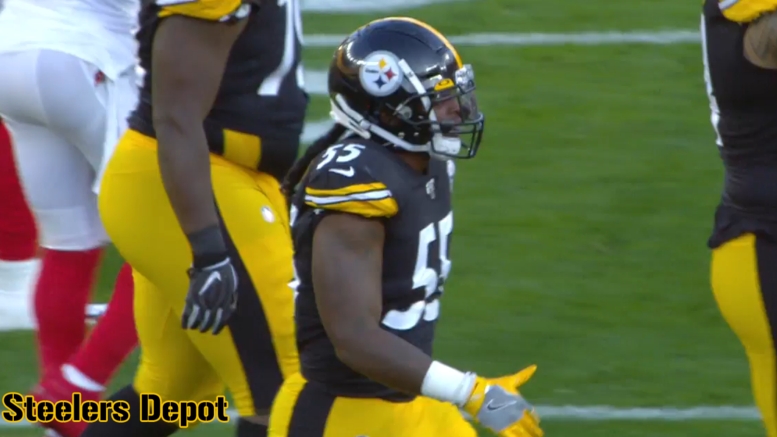 The more you invest in something, the more you hope, for the sake of your own comfort level, to see an early return on that investment. It gives you a piece of mind knowing that your faith in the investment’s high-achievement capacity was not ill-founded.

Consider last night’s performance by Pittsburgh Steelers first-round pick Devin Bush an early return on investment. After trading away a second- and third-round pick to move up 10 spots in the first round to draft him, he recorded 10 tackles in his first preseason game and nearly had an interception on a third-down play, though it was negated by a penalty anyway.

“It felt great today”, Bush told Missi Matthews following the game. “It was a ton of fun coming out here to compete with my teammates. It was just a great game today”. He assessed of his own performance, “I did alright. I should have caught that pick, but I’m not gonna dwell on that. But I definitely had fun out there”.

With Vince Williams resting with a hamstring injury, Bush and Mark Barron were able to start throughout the first half of the game without having to worry about being subbed in and out of the lineup, as the team has been doing with their top three inside linebackers.

Bush has been responsible for calling the defense pretty much such rookie minicamp, a job that they have really been feeding him since day one, and Head Coach Mike Tomlin also praised his ability to play at a high level while performing that task as well.

Said the rookie further of himself after the game in the locker room, there’s still “a lot more to improve on. Just the small stuff. Understanding more and just soaking everything up and learning the game”.

He was asked about a particular play on third and nine in the second quarter. He was in coverage for a third-down reception, but was able to stop it just short of the sticks. “Definitely a situational play right there”, he said, adding that he knew where the first-down line was. “I should’ve broke faster and broke the pass up, but he kind of fit it in there, so the next option was to not let him get a first down”.

It was an encouraging debut for a player that the Steelers need to be an impact player, in whatever capacity, from day one. It’s the reason they made such a big move to move up in the first round in April to go get him, and so far, so good.

“Keep going”, is what he had to say about what comes next. Continuing doing what he’s doing, continue to grow, to get better every day, to get more comfortable in the defense and in being its mouthpiece. And next time, get that interception.