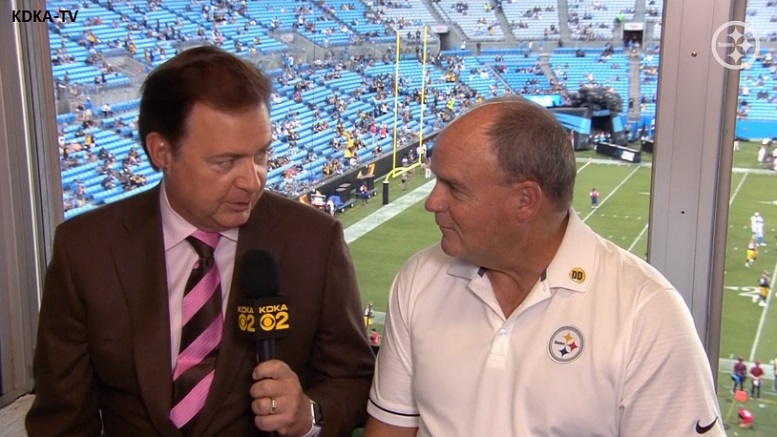 The Pittsburgh Steelers are currently in the process of setting their initial 53-man active roster for the 2019 season and that final group of players the team takes on the road in Week 1 figures to include three tight ends. Currently those three tight ends look like they might be Vance McDonald, Xavier Grimble and rookie Zach Gentry but that’s only of the general manager Kevin Colbert doesn’t add one from the outside in the coming days.

Ahead of the Steelers Thursday night preseason finale against the Carolina Panthers, Colbert sat down for a quick interview with Bob Pompeani of KDKA-TV and the team’s general manager was asked if there’s currently a number two tight end on this roster or does he feel like he needs to look elsewhere for one in the coming days.

“Well, Xavier Grimble technically is the number two right now,” Colbert said about the tight end depth chart. “It’s a new role for him, so we’re excited to see if he can accept that challenge and fill in where Jesse James was last year. It’s new for him.”

Colbert also volunteered a little bit of information on Gentry, the team’s fifth-round draft pick this year out of Michigan, as well.

“Zach Gentry is of course a rookie and he’s got to continue to grow to prove that he can be a number three,” Colbert told Pompeani.

As you can probably tell, Colbert didn’t sound overly convincing that he’s happy with the current makeup of the Steelers tight end depth chart. That’s not overly surprising, however, as several of us on the site concluded a long time ago that an outside might need to be added if at possible just ahead of the start of the regular season.

Our very own Alex Kozora recently put up a nice short list of potential tight end targets for the Steelers and one of the players on that list Luke Willson, was cut Friday by the Oakland Raiders. He was one of my initial potential targets several weeks ago and it will be interesting to see if the Steelers quickly reach out to him. Another potential target, Jordan Leggett, might be turned loose by the Tampa Bay Buccaneers on Saturday, The Steelers already attempted to claim him off waivers earlier in the offseason, but the Buccaneers had the higher claim priority.

It probably doesn’t help the Steelers that the New England Patriots are also likely in the market for another tight end right now as well. They waived Andrew Beck on Friday and will be without Ben Watson and Lance Kendricks for their regular season opener against the Steelers due to both players being suspended, A few of the other tight ends have been sidelined with seemingly minor injuries.

During the recently concluded preseason, Grimble was targeted just three times in total and caught one pass for 13 yards. Gentry, on the other hand, finished his first NFL preseason with five receptions for 33 yards and a touchdown on eight total targets.